Wolves should wrap up title with triumph at Bolton

Oxford can move to brink of safety with win at Doncaster 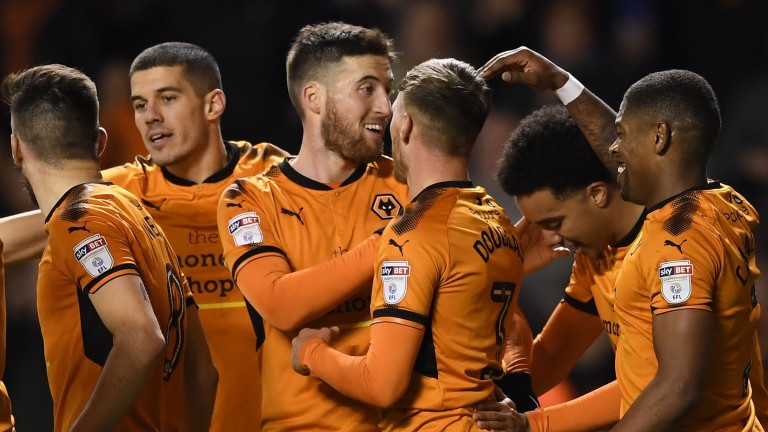 Bolton v Wolves
Wolves wrapped up promotion to the Premier League last weekend and can clinch the Sky Bet Championship title by beating relegation-threatened Bolton at the Macron Stadium.

One more point is needed for Wolves to go up as champions but they are not in the business of playing for draws and can finish the job in style.

There is more riding on the match for Bolton, who are precariously positioned just two points outside the drop zone and know that third-bottom Barnsley have played one game fewer.

Bolton conceded an injury-time equaliser in a 2-2 draw at Barnsley last Saturday and may look back at that moment as a decisive point in their campaign.

The Trotters have battled the drop all season and looked on course to survive after last month's 1-0 victory at home to Aston Villa, which opened up a six-point gap to the bottom three.

But they have slipped back into trouble after taking one point from their last five games and may finish the weekend in the drop zone for the first time since early February.

Scoring goals has been a problem all season but they have looked even less of a threat since Gary Madine was sold to Cardiff in January.

Madine remains Bolton's top scorer with ten goals and his physicality was an integral part of the way Phil Parkinson's men like to play.

There has been no lack of desire in Bolton's performances but it is hard to see how they are going to a hurt a Wolves side spurred on by a large travelling support.

Wolves may have lost some of their focus since going up but the class gap between themselves and Bolton is huge and does not look adequately reflected by the prices.

Doncaster v Oxford
Oxford still have some work to do in a fascinating Sky Bet League One relegation scrap but can move to the brink of safety by beating Doncaster at the Keepmoat Stadium.

There are not many tighter divisions than League One - every team except relegated Bury are involved in either the race for promotion or the battle against the drop.

However, 13th-placed Doncaster are unlikely to be going up or down and there was an end-of-season feel to their performance on Tuesday as they drew 3-3 at home to Bury.

Donny raced into a two-goal lead but shipped three goals in 23 minutes to the lowly Shakers and were grateful to defender Andy Boyle for rescuing a point.

Darren Ferguson will be urging his players to finish strongly but Doncaster's motivation appears to be on the wane and that gives Oxford a great chance to claim an important win.

Oxford reached 50 points - the oft-quoted EFL survival target - by winning 2-0 at home to Southend last Saturday and played well in a 1-0 loss at Wigan on Tuesday.

But they are just four points above fourth-bottom Rochdale, despite having played a game more, and cannot afford to ease off.

Another win may be needed and Karl Robinson's side can get it in Yorkshire.

Key areas of Forest Green's team were strengthened in the last window, with experienced striker Reuben Reid adding to the competition up front and Gavin Gunning boosting the backline.

Rovers have looked much improved and were deserving 1-0 winners in the local derby at Cheltenham last Saturday, easing six points clear of the bottom two.

Mark Cooper's side have won six of their last eight home games and look attractive odds-against favourites to dispatch the Spireites, who are on collision course with the National League.

Chesterfield have taken one point from the last five games and a likely defeat to Rovers could seal their fate if other results go against them.

Barnet v Newport
Second-bottom Barnet are showing plenty of fight in their battle against Sky Bet League Two relegation and can stay in the survival hunt by beating Newport at the Hive.

Martin Allen returned to Barnet last month for a fifth spell at the helm and is getting better performances and results.

It remains to be seen whether Allen's appointment was too late in the season but Barnet have won back-to-back home league games for the first time in the campaign and their remaining three matches - at home to Newport, away to Morecambe and at home to Chesterfield - look winnable.

Newport have gone off the boil since the end of their memorable FA Cup run, winning two of ten league games,  and head to north London without on loan Bristol City striker Shawn McCoulsky and key midfielder Joss Labadie, who are injured.