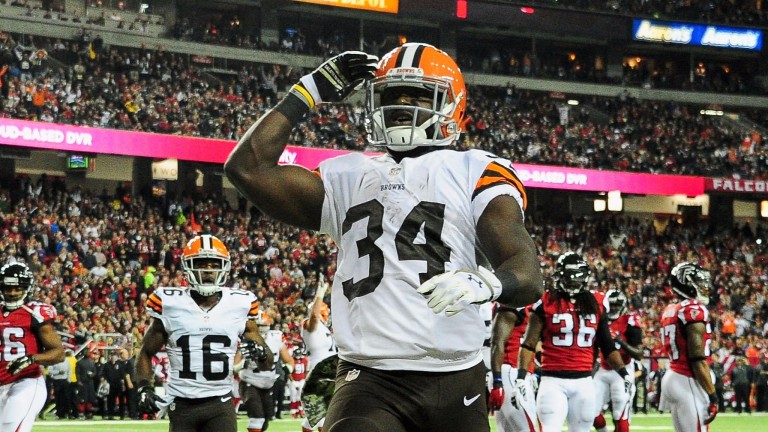 It could be a big night for Browns rusher Isaiah Crowell
Scott Cunningham
1 of 1
By Ian Wilkerson 6:49PM, NOV 9 2016

A price of 50-1 was available at the start of the season that an NFL team would complete the campaign without registering a win.

And as we enter the tenth week, those odds have been slashed to 9-4 as Cleveland attempt to avoid being only the second team since the 16-match campaign was introduced in 1990 not to taste victory.

For a team who have now registered nine successive losing seasons, it would be hard to plumb new depths but they have become the first team since 1964 to concede 25 points or more in each of their opening nine matches.

So why should they be backed to stay within ten points of AFC North rivals Baltimore tonight?

While injuries have played a huge role in the Browns’ dismal campaign, they have contributed to their own downfall with a string of slapstick calamities.

This was no better expressed than in their first game against the Ravens in Week Two when they squandered a 20-point lead having scored three touchdowns.

Although it is difficult to put a positive gloss on events in Cleveland, they have at least been competitive in some of their matches.

The Browns lost by two points to Tennessee, by six to Miami and by two to the New York Jets, none of whom have winning records, so optimists should not be put off too much.

The Ravens will hope that last week’s 21-14 victory in a much tougher divisional game against Pittsburgh will kick-start their season.

But they have not been great offensively and it is worth noting that they have posted an average of 19.3 points a game while the Browns have mustered 18.7.

The Baltimore defence performed well against one of the best offences in the league in their win over the Steelers, restricting them to just 36 rushing yards.

However, the Browns do have a decent weapon in running back Isaiah Crowell and their receiving talent is improving with Terrelle Pryor performing well and first-round draft pick Corey Coleman back from injury.

Baltimore, who do not have a great record against the spread at home, have failed to cover the handicap in five of the last six games they have been favoured by a double-digit handicap and that may not end, even if Cleveland’s winless streak continues.