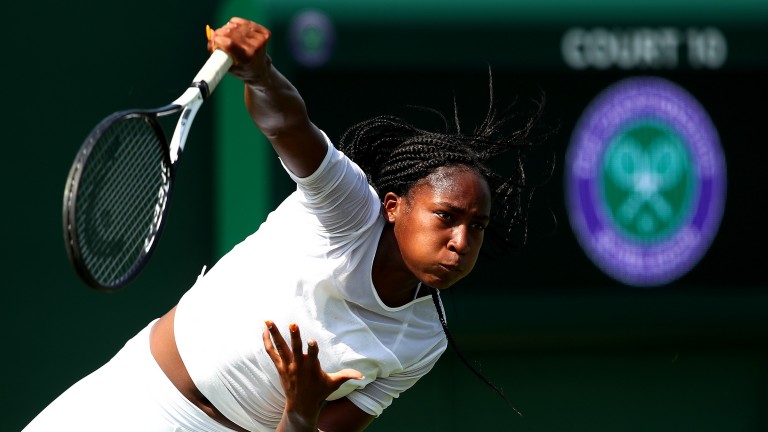 Cori Gauff looks focused as she gets in some practice before her Court One clash with Venus Williams
Clive Brunskill
1 of 1
By Adrian Humphries UPDATED 4:06PM, JUL 1 2019

Five-time Wimbledon champion Venus Williams has still been a viable title contender in the London major in recent years, but a clash for the US veteran against her teenage compatriot Cori Gauff is an altogether different kind of test for the elder of the legendary sisters.

Gauff is the youngest qualifier to progress to the main draw in the history of the All England Club tournament. Already ranked the world’s top junior, she looks a bit special – she won all three of her Roehampton qualifiers in straight sets – and could make this a seriously tough opening test for Williams on Court One.

Venus and her sibling Serena have been the principal role models for Gauff, who has trained hard for moments such as this, and even though the unseeded world number 44 is a 2-7 shot to win the clash, she’s unlikely to want to embarrass the debutant.

Simona Halep is a quality operator on any surface these days, but each match should be assessed on its merits and Aliaksandra Sasnovich is quite capable of causing problems for the former world number one in their Court One opener.

Sasnovich has not been in the best of form but the Belarusian could be inspired by returning to Wimbledon, where she beat Petra Kvitova in round one last year on the way to reaching the last 16.

The outsider with a handicap start of 6.5 games looks too short at 1-2, but even-money with a 5.5 pull is still hard to quibble with.

Monica Puig could be a viable title outsider this fortnight having won the Rio Olympics in 2016, but this is a potentially tough opener for the Puerto Rican.

Anna Schmiedlova may lack the power to become a force on tour, but she possesses superb finesse and a fine array of shots.

Puig’s power will probably win the day, but the Slovak is worth a bet with a start of 5.5 games.

The early 8-11 about Anastasia Potapova defeating Jil Teichmann has been taken but at slightly shorter odds the Russian should still be able to do the business.

Potapova, 18, is one of the best youngsters on the WTA Tour and she’s up against an opponent who hit a rare patch of form to win the Prague Open on clay in May.

Teichmann, a 21-year-old Swiss born in Barcelona, should have further success but the pedigree of Potapova, who reached the Wimbledon juniors semi-finals three years ago, appeals more.