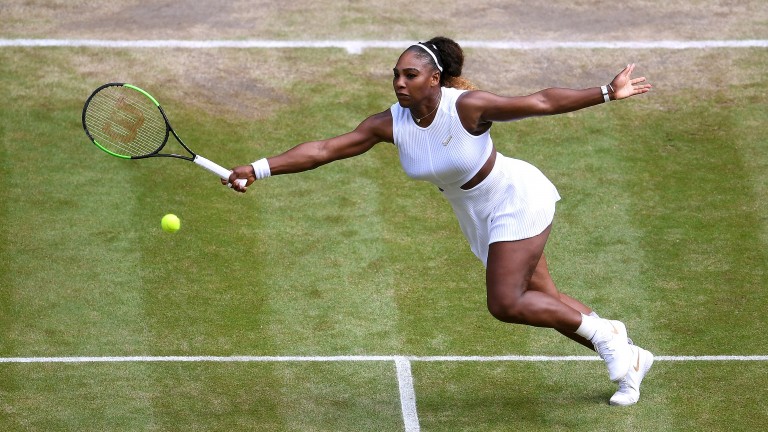 Serena Williams was in total control during her semi-final victory over Barbora Strycova
Laurence Griffiths
1 of 1
By Adrian Humphries UPDATED 1:43AM, JUL 13 2019

This year's Wimbledon women's singles final between Serena Williams and Simona Halep could be way more thrilling than last year's All England Club anticlimax, when Serena barely turned up against Angelique Kerber, and the status quo looks likely to be restored.

Seven-time All England Club singles champion Williams says her quest to equal Margaret Court's record tally of 24 major singles triumphs is not burdening her and that could well be borne out on Centre Court on the penultimate day of the grass-court major.

The prospect of drawing level with Court purportedly caused Williams issues in her final defeats to Kerber at Wimbledon last year and Naomi Osaka in the US Open, but the title favourite insists it won't be a problem when she faces Halep.

Williams, who destroyed Johanna Konta's conqueror Barbora Strycova 6-1 6-2 in the semi-finals, believes her mixed doubles partnership with Andy Murray has helped sharpen her up for her singles campaign.

Her serving has been excellent – even better than it was in south-west London last year. Her groundstrokes have improved as the tournament has gone on too – Strycova was swept aside by a raft of winners from Williams – and timely trips to the net have been prosperous after her two outings with Murray.

Credit to Halep – the seventh seed has looked on top of her game all tournament and her hard graft culminated in a 6-1 6-3 mauling of eighth seed and WTA Finals champion Elina Svitolina in the semi-finals.

Halep, who has won only one of her four previous major finals, is the first Romanian woman to contest an All England Club women's singles final.

She is greatly looking forward to contesting a title match there and Halep feels she is capable of upsetting the applecart.

She won her first major at the fourth attempt in last year's French Open and Halep is definitely a stronger competitor mentally now than used to be the case.

Her run to the Wimbledon final has shown that Halep's game is not as limited as it used to be. She used to be a serial baseliner but these days, as she showed when defeating brilliant teenager Cori Gauff in the last 16, she has the armoury to make a mark on the fastest terrain in the game.

It's also a boost for her that former coach Darren Cahill, who guided Halep to Roland Garros glory last season, is in London egging her on.

But it's a concern that Halep has won only one of her previous ten matches with 37-year-old Williams. The Constanta native is likely to need a seismic display to make that record read a little better.

Halep's solitary victory over Williams was a 6-0 6-2 triumph in the early stages of the WTA Finals Singapore in 2014.

Williams almost looked happy for her friend Kerber last year, when her form suddenly went out of the window, although it was a different story when Osaka outplayed her in the US Open.

Williams' toys – perhaps they belonged to her young daughter Olympia – came hurtling out of the pram as Osaka ripped apart her power­house opponent at Flushing Meadows.

And perhaps therein lies a key point, that Williams may only be good enough now to do the business – and try to break Court's record – at Wimbledon.

Of course, we don't know that for sure. It's possible that she may be able to return to former lofty levels on clay and, especially, hard courts. But the younger oppo­sition these days are such good movers on hard courts that Williams may have run her race in majors on those surfaces.

Hence the need to make hay while the sun still shines on grass. Williams, who will be contesting her 11th Wimbledon singles final, has a job to do against Halep and it could pay to expect one of the most serious game-faces in tennis history.

For anyone who didn't get involved with generous pre-tournament offers of 8-1 about Williams, she still offers value to win the final.

Back Serena Williams to win Wimbledon with bet365

FIRST PUBLISHED 4:35PM, JUL 12 2019
With the younger players being such good movers on hard courts these days, Williams may now only be good enough to break Court's record at Wimbledon