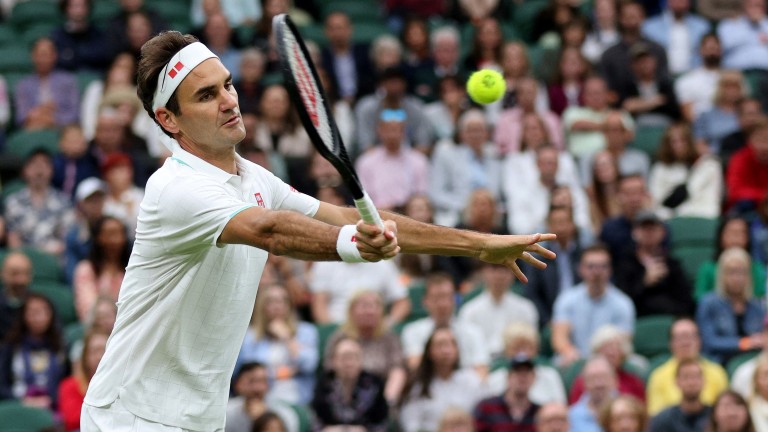 Roger Federer should step up on his first-round outing against Adrian Mannarino when he meets another Frenchman Richard Gasquet
ADRIAN DENNIS
1 of 1
By Adrian Humphries 1:21PM, JUN 30 2021

Free tennis tips, best bets and analysis for the men's and women's singles on day four of Wimbledon.

Wimbledon has been playing catch-up ever since it failed to start on time on Monday morning due to rain in London, but with roofs on its two main showcourts these days the sport's biggest stars are guaranteed to play some tennis and keep a relatively untroubled schedule.

Weather delays in the first couple of days at the All England Club meant that only five day-four matches - two men's singles and three women's singles - were known early doors.

With major players involved in all five clashes, it's difficult to see past the favourites and Roger Federer can lead home a fivefold accumulator by defeating fellow veteran Richard Gasquet.

The French 35-year-old could potentially be a tough opponent for eight-time Wimbledon winner Federer, especially after Adrian Mannarino won two sets against the Swiss legend before retiring due to injury in the first game of the fifth set with the score at 6-4 6-7 3-6 6-2.

Federer, winner of 19 of his 21 previous encounters with Gasquet, will probably find a way to emerge victorious. But the talented outsider could play his part in an exciting rumble if he's up for the fight after finishing strongly in his four-set victory over Yuichi Sugita in the first round.

Tennys Sandgren is no mug on grass and the American looks a bit underappreciated in the betting for his second-round tussle with Alexander Zverev after a solid four-set victory over Norbert Gombos.

But it's difficult to get away from Zverev's opening 6-3 6-4 6-1 win over Dutch qualifier Tallon Griekspoor.

With many of his chief rivals approaching the twilight of their careers, Zvevev could be a major player on the London lawns in the coming week and a half.

And while he may have to dig deeper to get past the Tennessee native, the class of fourth seed Zverev should tell.

Ashleigh Barty survived a first-round scare against Carla Suarez Navarro, but the Australian is likely to boss her last-64 outing in more traditional style.

Opponent Anna Blinkova is a decent performer but she's by no means the best of the large pool of fine young Russian players and she will do well to take Barty a deciding set.

Blinkova started well enough with a 6-2 6-2 victory over Timea Babos but the Hungarian, while a fine doubles player, is no worldbeater in singles.

Suarez Navarro's set win was roundly admired after her recent battle with cancer but Barty won the other two sets of their opener 6-1, showing that the top seed and title favourite clearly means business this year.

Experienced campaigner Andrea Petkovic made a promising start with a 6-4 6-3 victory over Jasmine Paolini, but her second-round opponent Barbora Krejcikova was even more impressive in downing the highly-regarded Clara Tauson 6-3 6-2.

Krejcikova, seeded 14th in the singles after her brilliant title triumphs in the French Open singles and doubles last month, can do no wrong right now.

The transformation this season in the 25-year-old Czech, formerly mentored by 1998 Wimbledon champion Jana Novotna, has been nothing short of incredible and it has been a joy to behold.

Petkovic, 33, is capable of rattling the cage of some decent players but Krejcikova's focus looks spot-on and it will be a surprise if her run in the Majors ends on this occasion.

Elena Vesnina looks in good condition fitness-wise considering she took more than two years off tennis, during which time she had her first child.

The Russian, a Wimbledon singles semi-finalist in 2016, dominated Martina Trevisan 7-5 6-1 in her opener, but she may need to find more against Cori Gauff in her second outing.

Gauff, seeded 20th this year, was tested in her curtain-raiser by British wildcard Francesca Jones but the American came through 7-5 6-4.

Gauff will again need to focus against Vesnina, who is a mean match-player. But considering the 17-year-old is one of the finest prospects the sport has ever seen, it will be disappointing if the Atlanta ace cannot find a way to squeeze out an opponent who is twice her age.