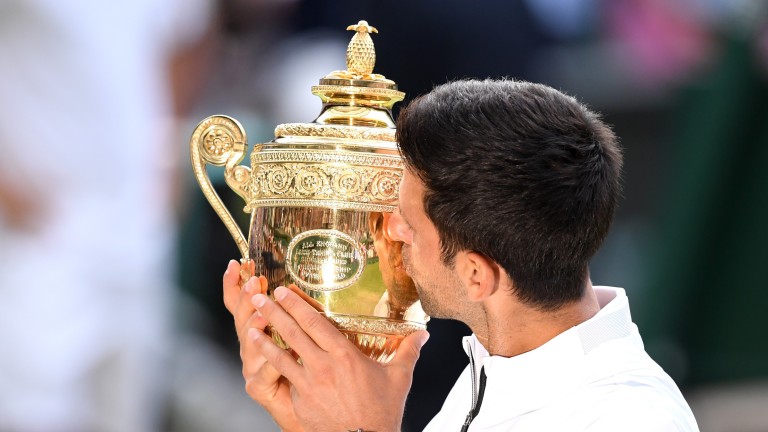 Novak Djokovic is two wins away from a sixth Wimbledon title
Matthias Hangst
1 of 1
By Aaron Ashley 3:00PM, JUL 8 2021

Free tennis tips, best bets and analysis for the men's singles semi-finals at Wimbledon on Friday.

Novak Djokovic is 1-4 to complete a Wimbledon hat-trick and bookmakers are expecting few problems for the super Serb in his semi-final showdown with Denis Shapovalov.

The world number one dropped the opening set in his first round win over British youngster Jack Draper, but he has barely broken sweat since with authoritative 3-0 successes over Kevin Anderson, Denis Kudla, Cristian Garin and Marton Fucsovics.

And while the 19-time Grand Slam champion should be too streetwise for Shapovalov, there are reasons to believe the 22-year-old Canadian can stay competitive.

The 12th seed has a game well suited to grass and he has delivered some excellent results at the All England Club.

Shapovalov has recorded straight-set wins over Andy Murray and Roberto Bautista Agut while he showed great courage to deny Russian Karen Khachanov in an epic five-set battle last time out.

The Canadian is a strong server - he has hit 59 aces in his four matches - and the shorter he keeps the rallies, the better his chances become.

Djokovic unsurprisingly leads their personal series 6-0 and should get the job done but Shapovalov, who is armed with a deadly forehand, has clinched a set in two of those encounters and can test the Serb’s title credentials.

Matteo Berrettini was many people’s idea of Djokovic’s biggest challenger for Wimbledon supremacy and so it has proved as the impressive Italian has built on his success at Queen’s with a run to the last four at the All England Club.

But giant Pole Hubert Hurkacz, who stands at 6ft 5 inches, is a big obstacle standing in his way.

The 24-year-old denied second seed Daniil Medvedev in a five-set marathon in the fourth round before playing pantomime villain and defeating Swiss great Roger Federer last time out.

Hurkacz could have wilted up against the noise of Federer’s fans on Centre Court, but instead thrived and ran out a convincing 6-3 7-6 6-0 winner.

The Pole has already won titles this year in Delray Beach and at the Miami Masters and should not be underestimated.

But Berrettini has a great grass-court pedigree and is full of confidence after a ten-match winning run.

The world number nine needed four sets to see off Felix Auger-Aliassime in the quarter-finals, a contest which lasted 42 games, and this duel with the strong-serving Hurkacz may follow a similar pattern.