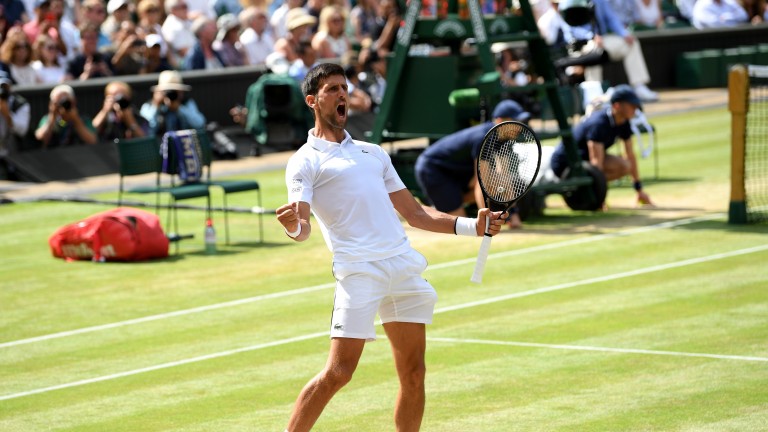 Roger Federer, one month from his 38th birthday, is looking a picture at Wimbledon this year and the Swiss star is giving himself the best possible chance to claim a ninth singles title in the grass-court major.

But while Federer fully deserved his semi-final triumph over great rival Rafael Nadal, whose preparation for the All England Club tournament had also been excellent, trying to bring down world number one and top seed Novak Djokovic on grass is a much tougher task these days.

The Centre Court crowd are likely to be fiercely pro-Federer and will hope to rile the 32-year-old Djokovic as much as they can. But the defending champion, who had his latest run-in with the crowd during his 6-2 4-6 6-3 6-2 semi-final win over Roberto Bautista Agut, insists he doesn't let it affect him and it’s probably wise to take him at his word.

Should Federer win, it would take him to 21 major singles titles, three ahead of Nadal and six clear of Djokovic. Victory for Djokovic, however, would see him capture his 16th title in a Slam and leave him just four wins behind.

Federer's record of 310 weeks being ranked world number one is also under serious threat. Djokovic is currently on 260, but if the Serb continues to dominate as looks highly likely, he could supersede that next year.

This will be the fourth time Djokovic and Federer have met in a major final and the top seed has won the last three of those encounters, two of which came at the All England Club in recent years. You have to go back to 2007 for Federer's last final triumph over Djokovic in a Grand Slam event.

Between January 2006 and September 2009 Federer made the finals of 15 of 16 majors. That's an incredible stat – and here he is still vying for the biggest titles in his seniority.

Federer fans will point to the fact that his statistics match up well with Djokovic and that he has won the last three major finals he has contested. But they were against Nadal in the 2017 Australian Open final and Marin Cilic in the 2017 Wimbledon decider and 2018 Aussie Open title match.

In terms of dropping sets, Djokovic has lost two and Federer three. But time and time again we've seen Djokovic turn up in title matches and produce form way above anything else he has produced in earlier rounds of majors.

Punters can consider backing Djokovic at 10-3 to win by three sets to one and 6-1 to come through in five sets, but it may pay to remember that a 3-0 triumph for the favourite heads the market at 11-4.

Djokovic is 5-9 to win the day and with so much at stake in terms of the pair's relative histories, it should pay to trust the four-time Wimbledon singles champion to get it right.

Federer versus Nadal made for terrific viewing and it was no great surprise seeing the big three the last trio remaining in the competion, but Djokovic has taken fast-court tennis to a new level in recent years.