Three-frame deficit may be a bridge too far for Higgins 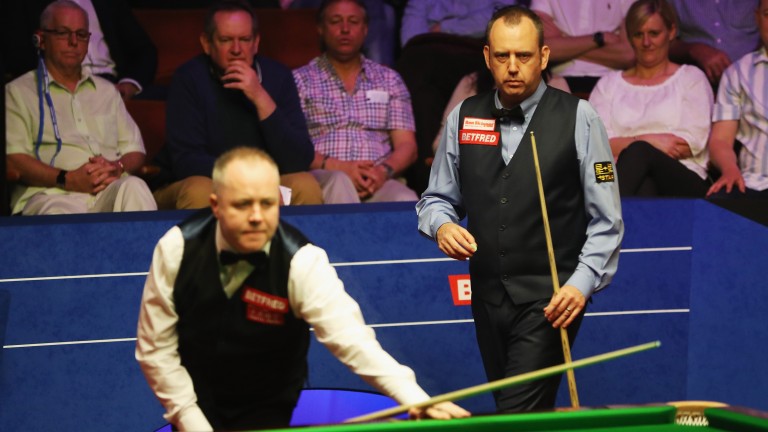 John Higgins (front) and Mark Williams in action on day one in Sheffield
Linnea Rheborg
1 of 1
By Adrian Humphries 1:21PM, MAY 7 2018

Mark Williams is 8-15 to win a third Crucible crown as he takes a 10-7 lead over John Higgins into day two of the Betfred World Championship final in Sheffield on Monday.

Williams, who many thought might be jaded after his semi-final thriller against Barry Hawkins on Saturday, raced into a 4-0 lead but Higgins showed dogged determination to fight back and level at 7-7.

However, the Welshman then kicked on again to win the last three frames on Sunday night, a run which meant Williams won both of the first two sessions.

Higgins did the bulk of the heavy scoring on day one, posting breaks of 127, 119 and 117. Williams posted just one ton, a run of 118, and Higgins is now 1-4 to make the highest break of the title decider with Williams quoted at 3-1.

Williams, the reigning 6 Red World Championship, Northern Ireland Open and German Masters hero, prospered by capturing a lot of the scrappier frames on day one, and that tells you that Higgins will need to tighten up and reduce his error count if he is to be competitive on day two.

The Wizard of Wishaw is 13-8 to win 11 of a possible 18 frames that remain - eight in the afternoon and a possible ten in the evening. But the Scot will need to find the sort of form that helped him to fight back and thwart Judd Trump in the last eight.

Williams is a more tactically astute performer than Trump, however, and for that reason alone the bookmakers are right to make the Cwm legend, who was crowned World Seniors champion in 2015, favourite to deny four-time Crucible king Higgins.