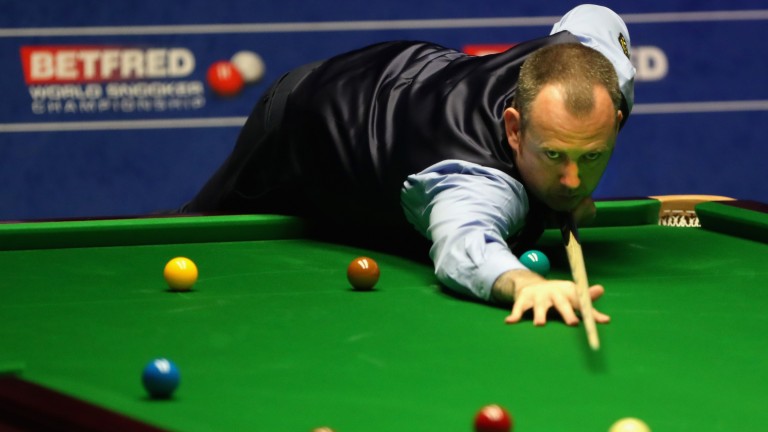 Mark Williams on his way to victory in Sheffield
Linnea Rheborg
1 of 1
By Adrian Humphries UPDATED 11:21PM, MAY 7 2018

Mark Williams was crowned Crucible king for the third time on Monday night after beating John Higgins 18-16 in the final of the Betfred World Championship in Sheffield.

Williams who had led Higgins 14-7, had to sit and suffer as the Scot fought back to level at 15-15. But the Welshman, whose first world titles came in 2000 and 2003, stayed strong to kick on again and win three of what proved to be the final four frames.

Seventh seed Williams, winner of the 6 Red World Championship, Northern Ireland Open and German Masters, was a 20-1 shot before the tournament started, while Higgins, seeded fifth after a campaign which saw him win the Indian Open, Welsh Open and Championship League, was 12-1.

Williams, who failed to qualify for the Crucible in 2017, is 10-1 fifth favourite with the sponsors for next year's worlds, with Higgins quoted at 7-1 third favourite behind 3-1 market leader Ronnie O'Sullivan and 9-2 world number one Mark Selby.

Higgins had captured the first four frames of the final session - Williams had won the first three sessions and importantly the first frame in each of those sessions - which meant that from 14-7 down the Wizard of Wishaw had won seven out of eight frames.

At 15-14 to Williams, the Welshman was 19-20 for victory with Higgins, who still needed to win four of the possible six frames remaining, an even-money shot. Higgins added to his run in frame 30 to make it eight won in nine, at which point he went favourite for the first time since the match started.

It was now a best-of-five-frames shootout and Williams stopped the rot in frame 31 to go 16-15 up. A break of 100, the 84th century of the tournament, from Williams sent him two up with a possible three to play. Williams was then best at 2-7 for the title.

The Cwm-based potter missed a pink ball effectively for the championship in frame 33 and then Higgins duly cleared up to reduce his arrears to 17-16, but one frame later it was all over.