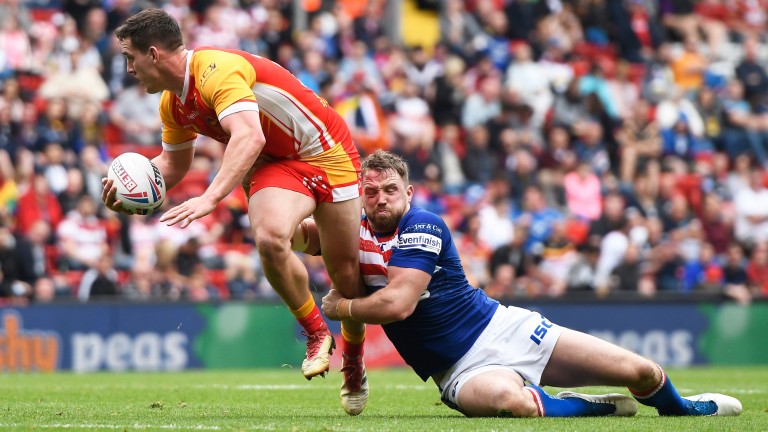 Champions Wigan were comprehensively put in their place by runaway Betfred Super League leaders St Helens last weekend but there was no disgrace in that and the Warriors can get their bid to reach the playoffs back on track at home to Wakefield.

Prior to the 32-10 loss against their neighbours, Adrian Lam’s team had won five consecutive games to move into the top five and the bookmakers make them 1-4 shots to return to winning ways against out-of-sorts Trinity.

Wigan are in a five-way scrap with Hull, Catalans, Castleford and Salford for three playoff places behind post-season certainties Saints and Warrington. They can ill afford to lose.

It’s difficult to make a case for Wakey upsetting the odds with the boys from Belle Vue in the midst of a dreadful run of results.

They’ve won just one of their last nine outings and only the win over Huddersfield three weeks ago has prevented total freefall.

One more win will probably secure safety but it’s unlikely to come at the DW Stadium and the visitors are offered a 14-point start on the handicap.

Wakey are without star forward David Fifita and ordinarily backing Wigan to cover the line would be the smart way to go.

Four of the Warriors' six home victories have come by more than this game's handicap but coach Lam has mounting injury worries. Joe Bullock and Tommy Leuluai are the latest men to join the casualty list due to knee and back problems.

Captain Sean O’Loughlin, Joe Greenwood and Ben Flower are all still sidelined while Tony Clubb and Joe Burgess will need fitness checks before the team is named.

Burgess notched a hat-trick in the 30-20 loss at Wakefield in April and if he gets the green light to play, he’s sure to be a popular 8-1 favourite in the first-tryscorer market.

It may be a night when an understrength Wigan have to work harder for victory than the odds suggest and a small punt on the hosts getting home by no more than 12 points may reap rewards.