Wigan can keep pressure up with another convincing home win

Penalty could get the scoreboard rolling 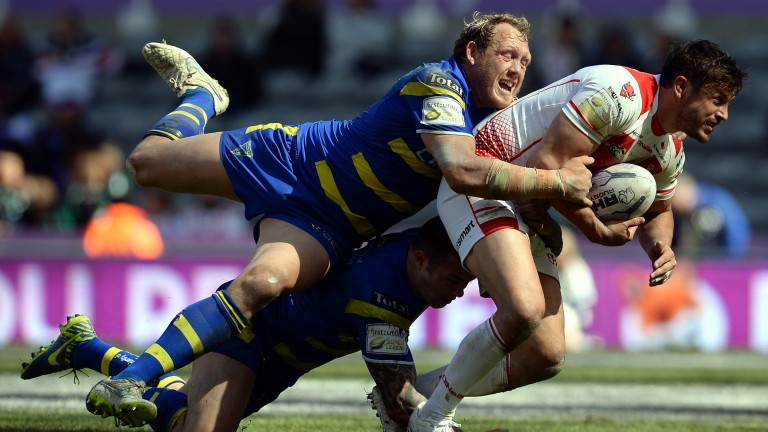 St Helens have dominated the Betfred Super League season since the starting gun was fired in February and they are now just 6-5 to win a sixth Grand Final in October.

Those looking for a bigger-priced alternative will be considering second-placed Wigan and third-placed Warrington.

Those teams go head-to-head in what should be an informative meeting at the DW Stadium on Friday evening. Currently they’re 9-2 and 11-2 respectively for Old Trafford glory.

It’s their fourth clash of the campaign with the Wolves boasting two victories to the Warriors one. The last meeting was one-sided as Warrington eased to a 23-0 success at the Halliwell Jones Stadium in the Ladbrokes Challenge Cup in June.

That was one of four away losses in a five-game stretch for Shaun Wane’s team after the coach announced he will be leaving the club at the end of the season. But back on home soil last weekend, the Warriors blew away Leeds in a 46-8 rout.

Wigan have been the punters' pals at home in 2018. They’ve won all seven games they have played at the DW and have covered the handicap on every occasion.

Now they are tasked with overcoming a four-point buffer and that looks within their compass given that all the Warriors' home victories have come by double-digit margins.

Warrington veteran Ben Westwood makes his 500th career appearance and is 6-1 to mark the occasion with a rare try.

Much more likely to be on the scoresheet is Wolves winger Josh Charnley. He returns to his old stomping ground having notched in seven of his 12 outings for his new club. He’s 13-10 to touch down in the match.

At longer odds, it may be worth chancing that the opening score of the game is a penalty. Warrington got the scoreboard moving with a two-pointer in the first league meeting of the year in March and Wigan replied in kind at the Magic Weekend in May.

It’s top versus bottom at the Totally Wicked Stadium with cellar dwellers Widnes 13-1 to produce the biggest shock of the season against runaway leaders St Helens.

The Vikings, who receive a 24-point handicap start, cannot escape the bottom four after losing a dozen straight Super League games but the heaviest of those losses was by 22 points.

Saints have won nine on the spin but haven’t been at their best in recent weeks and it’s eight games since they won by more than the handicap they are set on this occasion.

With Ben Barba and Tommy Makinson doubtful, the best bet could be to back the favourites to prevail by between 11 and 20 points at 3-1.