Wigan can hunt down rivals Warrington 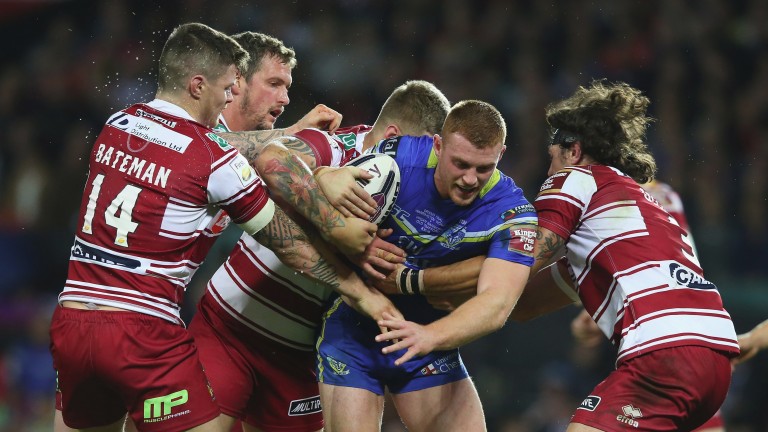 Five months ago, Wigan defeated Warrington to win the Betfred Super League Grand Final but punters have been flying in face of the form book this week by backing the Wolves to win the rematch at the Halliwell Jones Stadium.

Since the showdown at Old Trafford in October, the Warriors have a 100 per cent winning record while Warrington have lost all three of their league matches this season.

The competition’s sponsors were offering 11-10 against a home win when betting opened three days ago but 4-6 is now the best price against Warrington while early favourites Wigan have drifted out 7-4.

The market move has been partly prompted by an injury bulletin from Warriors coach Shaun Wane who revealed that wingers Joe Burgess and Lewis Tierney plus forward Ryan Sutton have joined an already lengthy casualty list.

Big names Sam Tomkins, Michael McIlorum and John Bateman all remain sidelined and the Wigan team will have a makeshift look to it. Youngsters Liam Forsyth and Tom Davies are in line to make their debuts.

Warrington boss Tony Smith is without Ben Currie, Stefan Ratchford and Dom Crosby but hopes to have winger Matty Russell available after he missed the defeat at Salford with a back spasm.

The Wolves led 10-8 at half-time in that game and interestingly they’ve enjoyed an interval advantage in the last four meetings against the Warriors.

It may be worth backing that sequence to continue especially with Wigan fielding a three-quarter line that has never played together before and may take time to gel.

In last year’s Grand Final and in the clash at the Halliwell Jones in September, Warrington were reeled in by Wigan after the break.

In the league game, the Warriors produced a miracle comeback after Ben Flower was sent off as they scored 21 points without reply with 12 men in the final 20 minutes.

The Wolves are no strangers to squandering half-time leads. Tony Smith’s team have done so seven times since the start of last season and with that in mind the 11-1 against Wigan trailing at the break but rallying to win looks an enormous price.