Wiesberger likely to be pressured from chasing pack

Lanky Austrian has plenty to prove 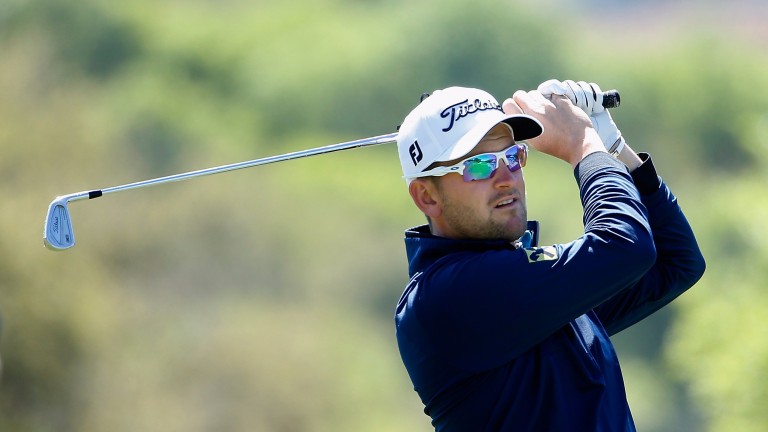 Bernd Wiesberger surged clear at the top of the Shenzhen International at the halfway stage, then kicked on again in the latter stages of round three to assume a three-shot advantage going into Sunday at Genzon Golf Club.

Wiesberger, a general 20-1 chance ante-post, is no bigger than 4-5 to collect the fourth European Tour title of his career in China on Sunday. The Austrian giant fired a second-round 65 to hit the front, then played his final four holes of the third round in two under par to extend his advantage.

European Tour maiden Dylan Frittelli is alone in second spot, just ahead of a quartet of chasers who are tied for third, headed by in-form Englishman Ross Fisher. Recent Tshwane Open victor Dean

Burmester is also in that pack.
Bubba Watson is sharing seventh place, five shots off the pace, while Tommy Fleetwood needs serious Sunday fireworks to threaten from a tie for 15th spot, eight behind Wiesberger.

Bernd Wiesberger was hugely impressive when winning the French Open in July, 2015, with a final-round 65, destroying the field by three shots at one of the toughest venues on the circuit, and it looked likely the Austrian would move on to bigger and better things.

It has not happened. Since that glorious effort almost two years ago, Wiesberger has been disappointing in contention, a lack of short-game confidence letting him down. He has had countless chances to claim a fourth title, becoming an almost permanent fixture on European Tour leaderboards, but the leap from contention to victory has proved too much.

Only a couple of months ago, Wiesberger carded a second-round 63 to assume pole position in the Maybank Championship, but he followed up with a third-round 73 to drop into the pack. Big Bernd has certainly not enjoyed frontrunning of late.

The Shenzhen International, though, represents the best opportunity Wiesberger has had. Coming into the week, a lack of course experience was the reason many punters would have crossed him off their shortlist. He was making his debut at a track which many players in the field had competed on three times before. The powerhouse clearly loves the set-up.

The worries for Wiesberger backers will probably come close to the hole. His driving is exceptionally good, but his wedge-play is inconsistent and he can often putt like an elephant. A four-shot advantage over the closest European Tour champion is significant, though, and his top-class long-game may be enough to get him home. Backers at 20-1 can sit back and enjoy the ride, but there is no urge to get involved at 4-5.

Racing Post followers should still get a run for their money from Ross Fisher, who was recommended ante-post at 16-1. Fisher has done well to work himself into a share of third place after a slow start on Thursday and appears in control of all departments of his game. He looks sharper than ever with the putter.

The hope is the shape of the leaderboard encourages Fisher to be more aggressive. When chasing Tyrrell Hatton in the Dunhill Links in October, Fisher played conservatively and let Hatton get away.

There were signs of caution from Fisher over the closing holes of round three in Shenzhen – a lay-up at the driveable par-four 11th, then hitting the middle of the green at the par-three 16th when the pin was perfect for his natural shot-shape, before another lay-up at the par-five 17th. Fisher is blessed with explosive power and is well capable of catching Wiesberger if he attacks from the off.

Dylan Frittelli is sandwiched between experienced European Tour performers, all of whom are proven winners, so the nervous South African seems likely to be outclassed. Punters looking to get involved in the outright market at this stage should concentrate on the 9-1 about Fisher and the 14-1 about Dean Burmester. The two big-hitters play together in a power-packed twoball.

Burmester won the Tshwane Open two starts back and is maturing into a serious force at this level. He eats par-fives for breakfast and Genzon sets up extremely well for him. Round four could be a case of whether Wiesberger can repel the charging duo of Fisher and Burmester.

Final-round twoball punters are pointed towards Brandon Stone, who made eight birdies and an eagle in a stunning stretch of golf from the first hole to the 14th in round three. The South African youngster is potentially world-class and clearly found his A-game on Saturday. Richie Ramsay, who plodded to a third-round 72, seems likely to be left behind in the 4.09am match.

Tommy Fleetwood can also be expected to finish strongly – the Abu Dhabi champion has played superbly from tee to green, finding almost 90 percent of greens in regulation, but holed hardly anything. With a bit more luck on the greens on Sunday, Fleetwood should destroy Fabrizio Zanotti in the 4.27am contest.

The action resumes at 11.51pm Saturday night (UK and Ireland time), with the final twoball of Wiesberger and Frittelli scheduled out at 5.40am Sunday morning.