Who will win Serie A? Lazio overpriced to cause sensational Scudetto upset 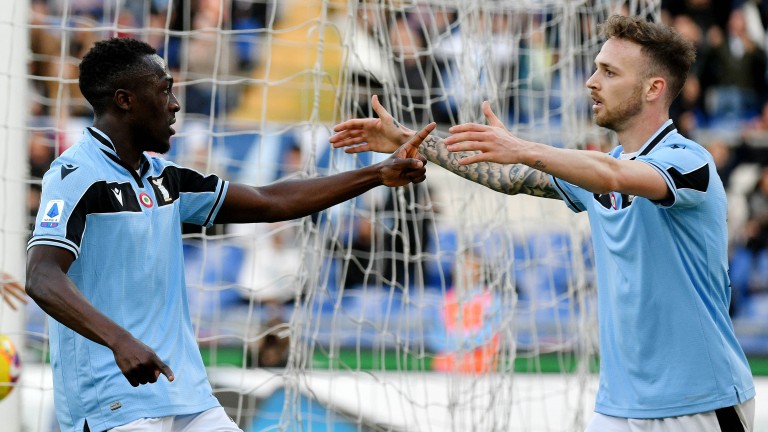 Serie A returns to action with Torino v Parma on Saturday 20 June. Here Liam Flin takes a look at the season so far in Italy's top flight...

Lazio the closest challengers to Juventus in Scudetto tussle

It is testament to the strength at the top of Serie A this season that a team who are unbeaten in the league since September and can boast one of the deadliest strikers in European football are not in pole position for the title.

Simone Inzaghi's Lazio, primed with 27-goal forward Ciro Immobile, are undoubtedly Italy's surprise package this season, having been 100-1 for the Scudetto at the start of the campaign, but bookmakers are not convinced.

They rate the capital club 5-2 to win the title - a big price given their sensational 21-game unbeaten run and the strength of their first 11 - while Juventus remain 2-5 favourites to secure a ninth straight Serie A trophy.

It remains to be seen whether Lazio will have been unsettled by the three-month hiatus but punters will not need to wait long to find out, with the Rome outfit facing a tricky visit to Bergamo to face Atalanta in their first game back in action.

The title race could hinge on one game. Lazio travel to the Allianz Stadium on July 20 to face leaders Juventus and, the fact they have beaten the Old Lady in both the league and Italian Super Cup this season, coupled with the dilution of home advantage with no fans in the stands, makes them genuine contenders to win that game.

Inter Milan know all too well how a trip to Turin can hamper a team's title prospects - they were comprehensively beaten 2-1 there before the league's postponement - and, eight points behind Lazio with a game in hand, it is easy to see why they are as big as 9-1.

But Juventus possess an ageing squad and when it comes to starting line-ups, the disparity between them and Lazio is not as big as the odds suggest. The capital club may yet upset the status quo.

Bookmakers have top-four odds spot on

Such is the demise of Napoli this season that they have not only failed to engage in the title race but a top-four berth looks a long way off as well, as reflected by their quotes of 20-1 to make the Champions League places.

Roma are outside shots for a spot in the top four at 7-2 with some having put forward the argument that the distraction of Champions League duties could hinder Atalanta's chances of dining at Europe's big table next season.

But with games coming thick and fast and players having had an adequate rest period during the hiatus, Atalanta could now get even more out of their small set of players than before.

They have goals in abundance - Josip Ilicic, Luis Muriel and Duvan Zapata have netted a combined 47 times in all competitions this term - and while finishing fourth would be another admirable campaign, do not be surprised to see these plucky overachievers go deep in a rehash of the Champions League later this year.

Shot-shy Udinese should be worried

Barring miraculous recoveries, Brescia and Spal are set for relegation this season but 18th spot may not be the foregone conclusion the prices suggest.

Lecce are 8-15 to join the struggling duo in Serie B next season and, although they are the most permeable side in the division with 56 goals conceded, what they offer going forward is encouraging.

They are the top scorers in the league's bottom eight and had won three of their five matches before the break, beating Torino, Napoli and Spal.

Seven of their final 12 matches are against bottom-half opposition and it could pay to back a side with zeal in the final third and a weaker defence than a team like Udinese who seem to have forgotten where the goal is this season.

Their miserly return of 21 goals in 26 matches is the second-worst in the division and with Juventus, Lazio, Atalanta, Roma and Napoli all still to play, they could be a big price for the drop at 6-1.