Whitlock may cause Van Gerwen most problems 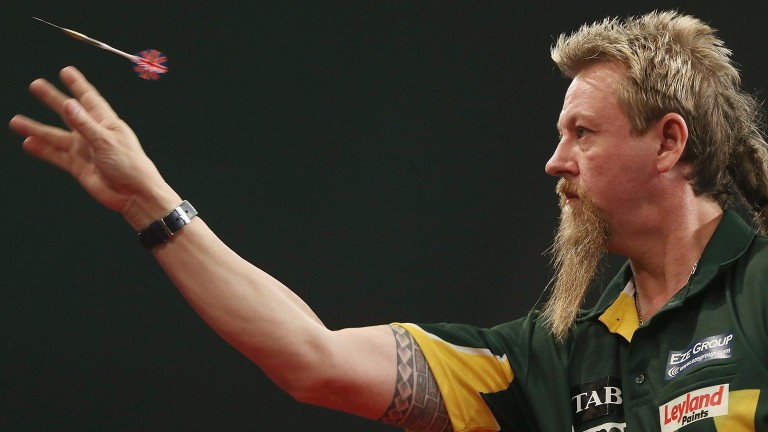 Simon Whitlock has been showing signs of a return to something like his best for a while now and could shine in Somerset
Michael Bradley
1 of 1
By Steve Davies 8:05PM, NOV 24 2016

The Players Championship Finals has thrown up some big-priced winners in its seven-year history – though that looks less likely this year given the form of world number one Michael van Gerwen.

The Dutchman cruised to a 24th title of 2016 on Sunday when he battered James Wade to win the Grand Slam and goes off the 4-5 favourite in Minehead this weekend.

He’s got plenty in his favour, beyond his sizzling form. Phil Taylor isn’t at Butlins, having not qualified for the 64-man competition which rewards performances across the 20 Players Championship events played during the year.

And the seedings are such that only one of Gary Anderson, Peter Wright and James Wade – the other semi-finalists in Wolver­hampton on Sunday – can reach the quarter-finals.

While the format is best-of-11 legs for two rounds, the matches are more drawn out beyond that, so presuming Van Gerwen sees off Andy Hamilton and either Vincent van der Voort or Andrew Gilding, it’s hard to see him being stopped.

The triumphs of Paul Nicholson at 80-1 in 2010 and 200-1 poke Kevin Painter in late 2011 show there is scope for surprises in this event, largely because the seedings aren’t based on world rankings.

So for a couple of in-form big-priced alternatives to the main man, consider Simon Whitlock at 50-1 and James Wilson at 125-1.

Australian ace Whitlock is definitely getting back to his old self with two tour wins in the last couple of months and a few impress­ive efforts on TV. The scoring takes care of itself with Whitlock – if he’s hitting his doubles he has to be a dangerous outsider.

Wilson is a player on the up and looks overpriced consider­ing he is in what is unquestionably the softest quarter. Reaching his first tour final in September has given the Yorkshireman real self-belief and he looks like he belongs on the big stage.

The first round will see plenty of upsets. Indeed, if, for example, Jamie Caven beats Jamie Lewis, would that even be considered an upset? Neither man is in the greatest of form yet Caven can beat anyone on his day and make a mockery of odds of 11-10.

Equally, it would be no surprise if Devon Petersen took out Robbie Green, especially if Kong starts missing a double or two. An imperious scorer, sometimes a vulnerable match-clincher, Green can be opposed here because Petersen will keep the game tight.

Dimitri van den Bergh beat Gerwyn Price only last weekend in a Grand Slam group game so is presumably confident he can topple the Welshman once more, while on current form Alan Norris shouldn’t be the outsider against Michael Smith.