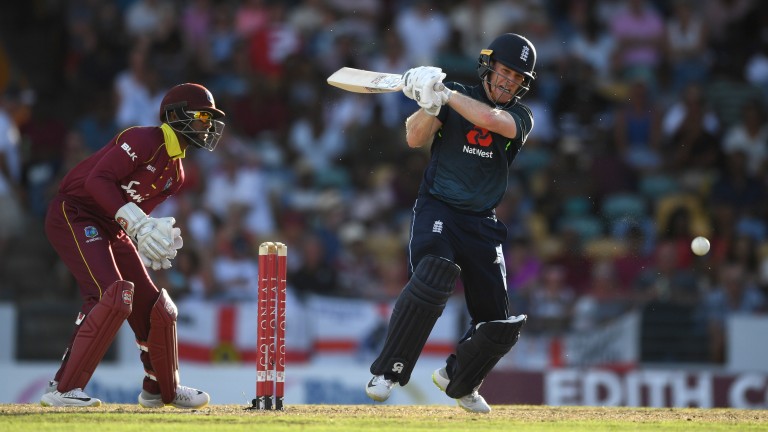 England's five-ODI series in the West Indies is level at 1-1 after two contrasting run-chases from Eoin Morgan's World Cup favourites.

The tourists cantered to a target of 361 in the first ODI but slipped from 228-4 to 263 all out to lose Friday's second game by 26 runs, upping the stakes for the third match in Grenada.

Bangladesh were bowled out for 70 in the last ODI in St George's five years ago but there are some confident batsmen on both sides in action in the first of a double-header in Grenada.

Jason Roy and Joe Root scored centuries for England in the first ODI while skipper Morgan looks in fine nick with innings of 65 and 70.

For the West Indies, blistering centuries from Chris Gayle and Shimron Hetmyer have caught the eye but number three Shai Hope plays a key role in their one-day batting unit.

Hope made a smooth 64 off 65 balls in the first ODI before a loose pull in the second game saw him caught in the deep for 33.

However, a runs line of 26.5 with Hills looks well within his scope – it is as high as 30.5 with other firms – given his superb form against the white ball.

His eight innings in India and Bangladesh at the end of 2018 yielded three centuries and a 95 and he will look to anchor the innings and provide a platform for the Windies' big hitters.

Spinners Gayle, Sunil Narine and Muttiah Muralitharan are among the leading wicket-takers in ODIs in St George's and England leggie Adil Rashid could enjoy the Grenada leg of the tour.

Rashid was held back until the 34th over of the first ODI but still picked up three wickets as the home batsmen attempted to hit him out of the ground. He took the crucial scalp of Gayle, bowled for 50, in a fine spell in the second game.

The Yorkshire spinner had the best year of his one-day career in 2018, claiming 42 wickets in 23 innings, and he has picked up seven four-wicket hauls and a five-for in the 76 ODIs in which he has bowled.

Venue
There is little recent course form at the National Stadium in St George's, where the Windies won five ODIs in a row against Zimbabwe and Bangladesh in 2013 and 2014.

Darren Bravo has scored a century and two fifties in his five innings at the venue but Gayle's top score in ten ODI knocks in Grenada is just 60.

Team news
West Indies paceman Sheldon Cottrell should keep his place after a five-wicket haul in the second ODI.

England's Chris Woakes could return after being rested for the second game in Barbados.

FIRST PUBLISHED 8:00PM, FEB 24 2019
Hope's eight innings in India and Bangladesh at the end of 2018 yielded three centuries and a 95 and he will look to anchor the innings