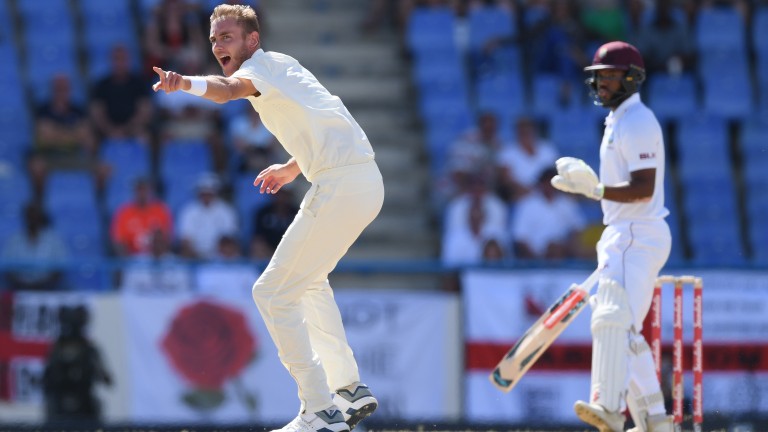 Stuart Broad was England's best bowler on day two in Antigua against the West Indies
Shaun Botterill
1 of 1
By Liam Flin 3:22PM, FEB 2 2019

West Indies are 2-7 to wrap up the second Test against England in Antigua and win the three-match series in the process after taking an 85-run first-innings lead on day two.

Having started the day on 30 without loss, the Windies saw each of their top three - Kraigg Brathwaite (49), John Campbell (47) and Shai Hope (44) - put on solid scores as England's bowlers grew frustrated.

Stuart Broad was brought in for the second Test having been left out for the opener and did the most damage with the ball, finishing with 3-42.

But it was overall a frustrating day in the field for Joe Root's men, who did not take their chances early in the innings. Jos Buttler spilling two easy catches and Rory Burns dropped Shimron Hetmyer much to James Anderson's frustration.

Darren Bravo remains at the crease, having scored 33 from 165 balls and is 8-11 with BoyleSports to reach the half-century mark.

Star of the day

The bulk of the Windies batsmen put in impressive performances with Bravo and opener Brathwaite in particular putting up early resistance.

But on a challenging day for England, Stuart Broad showed why he cannot be left out of their Test side.

It was not until the Windies had surpassed 150 runs that Broad got his first wicket but he then chalked up two dismissals in the space of four balls, bowling Roston Chase after dismissing Hope.

He finished with an economy rate of 1.50 and, if England have any chance of salvaging something from this series, Broad will likely be central to it.

England's batting contingent have been far from their best in the West Indies but Jonny Bairstow appears to have nailed down the number-three spot.

In the first Test capitulation, he mustered scores of 12 and 30 before putting on a half-century in Antigua, only to fall victim to an unfortunate lbw against the lethal Kemar Roach.

Bairstow nonetheless looked comfortable on a bowler-friendly pitch and the 5-1 about him finishing England's top scorer in their second innings should be snapped up.