England 8-15 to win series-opener in Barbados 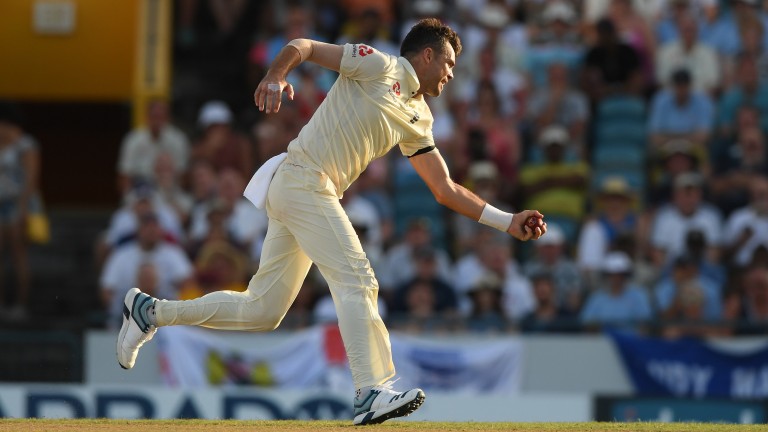 James Anderson claims a sharp catch off his own bowling to dismiss Jason Holder
Shaun Botterill
1 of 1
By James Milton UPDATED 5:57PM, JAN 24 2019

After a solid start to the series from the West Indies, England roared back with the second new ball to end day one in Bridgetown as 8-15 favourites for the first Test.

Five of the top six home batsmen reached 40 and they were 126-1 before Ben Stokes broke through with two wickets in five balls.

A more significant collapse was to follow when England claimed the second new ball after 80 overs with James Anderson gaining his rewards for a miserly display of fast bowling.

Anderson helped reduce the Windies from a promising 240-4 to 264-8 and Stokes proved there was plenty of life in the pitch, producing a vicious rising delivery to get rid of number nine Kemar Roach.

Star of the day
Shimron Hetmyer gave glimpses of his outrageous ball-striking ability in an impressive half-century but Anderson's more traditional Test-match values stole the show.

The veteran paceman gave the Windies absolutely nothing. At one stage his figures were 1-18 off 17 overs and he could have had a five-wicket haul if Jos Buttler had held on to a chance given by Hetmyer.

Best bet for day two
Sky Bet anticipate a decent batting performance from England, offering evens that they reach 380 in their first innings.

However, England's latest top three of Rory Burns, Keaton Jennings and Jonny Bairstow could face a tough test against Roach and Shannon Gabriel so the tourists' batting depth may prove crucial once again.

Wicketkeeper Ben Foakes is 7-2 to score a first-innings fifty and that looks a decent price given that he was England's leading runscorer in his debut series in Sri Lanka.

He batted with great poise and confidence on the Teardrop Isle, making 277 runs in six innings, and with Moeen Ali, Sam Curran and Adil Rashid below him in the order he is unlikely to run out of partners.