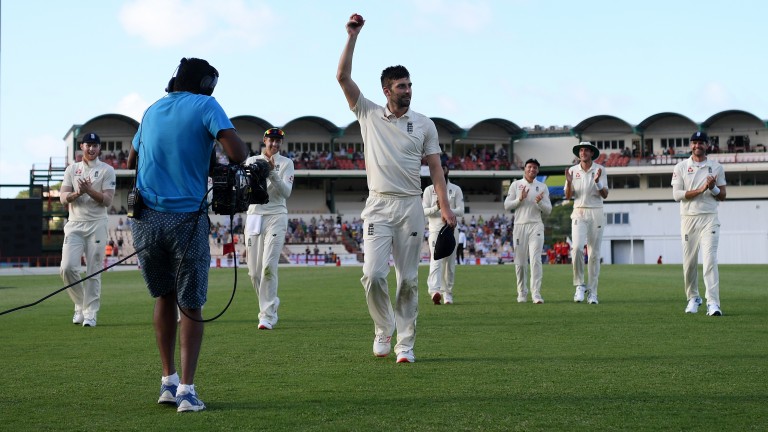 England finally turned the tables on the West Indies as a destructive spell of fast bowling from Mark Wood put the tourists in charge of the third Test in St Lucia.

Wood, added to the tour party only after an injury to Olly Stone, and spinner Moeen Ali did the damage as the Windies slipped from 57-0 to 79-6 and openers Rory Burns and Keaton Jennings extended England's lead to 142 by stumps on day two.

Joe Root's men, 2-0 down in the three-match series, are 1-14 to claim a consolation victory on a pitch that has lived up to its billing as the quickest surface in the Caribbean.

England had started the day as 10-11 shots to pass 400 in their first innings but they had to settle for 277 after losing their last four wickets for just seven runs.

Kemar Roach was too sharp for the England tail but Wood had the final say on a thrilling day of Test cricket.

Star of the day
Wood's express pace is no secret but form and fitness issues have restricted him to just 13 Test caps and he hadn't taken more than three wickets in an innings before this match.

It was tremendous to see him hitting speeds of 95mph during a classic display of fast bowling in which two of his victims were caught in the gully, two at slip, and last man Shannon Gabriel lost his middle stump to give Wood a well-deserved five-wicket haul.

Best bet for day three
Sky Bet have chalked up England's second-innings runs line at 274.5 but 16 wickets fell on day two and batting is unlikely to get much easier.

Gabriel, Roach, Alzarri Joseph and Keemo Paul pose a huge threat to the visiting batsmen and it may be worth backing at least three wickets to fall before England reach 100.

Burns, Jennings and number three Joe Denly are all under pressure, to varying degrees, and England were reduced to 69-3 in their first innings. Given the conditions they are well ahead in the game but the home bowlers should be inspired by Wood's efforts on day two.