Well-organised Adelaide United set for another shot at silverware

Goals may be in short supply 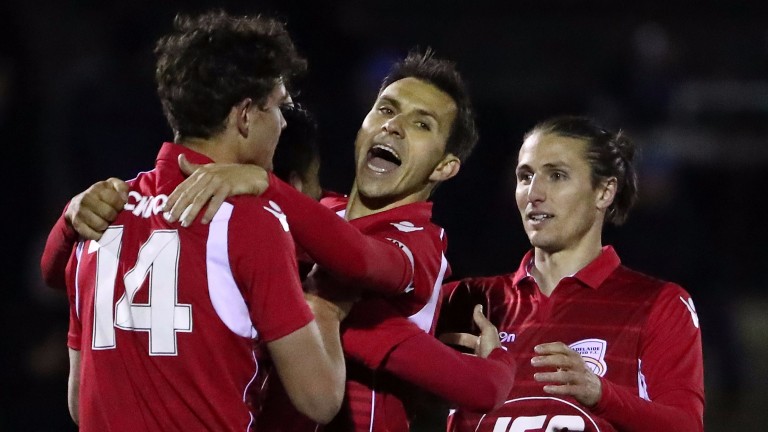 Adelaide United could be celebrating in Bentleigh
Scott Barbour
1 of 1
By Aaron Ashley 8:00PM, OCT 4 2018

Adelaide United have made the final of the FFA Cup twice since it began four years ago and the A-League outfit can make their class tell and tee up another shot at silverware with victory over Bentleigh Greens.

Although the competition is still in its early days, all eight of the previous FFA Cup finalists have been A-League representatives and the top-flight visitors should once against have too much quality for their lesser rivals.

Marco Kurz’s men, who were champions in 2014 and runners-up last season, have booked their place in the semi-finals without conceding and another win to nil at odds-against makes plenty of appeal.

The Reds have already shut out Central Coast Mariners, Queensland Lions and Apia Leichhardt Tigers and defensively they look well-organised with experienced Dane Michael Jakobsen at the heart of their rearguard.

Bentleigh Greens have also made the last four with three clean sheets, winning both of their home games 1-0, so goals look likely to be in short supply.

Their latest cup success came over league rivals Heidelberg United, where they needed an 87th-minute winner to progress, and they may find things much tougher against better opposition.

Adelaide have the greater quality in the final third and that could prove crucial in a tight affair.

Craig Goodwin, signed from Eredivisie outfit Sparta Rotterdam in the summer, has scored in every round so far, while Ryan Kitto netted seven league goals from just 16 appearances last season.