Expect plenty of action at Amex 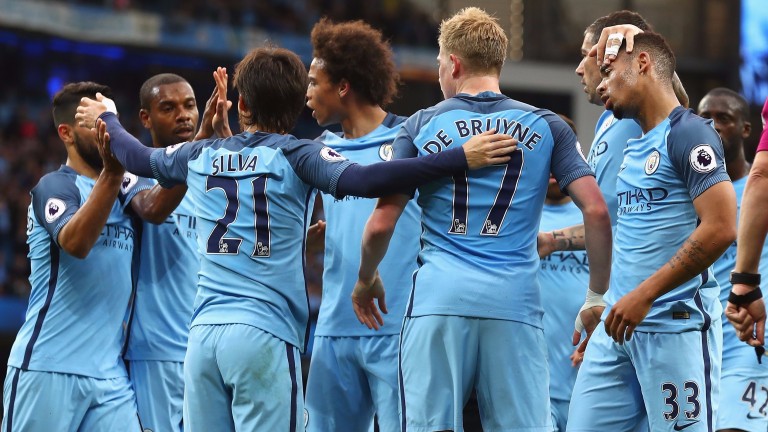 Brighton, the clean-sheet kings of the Sky Bet Championship, will have their defensive fortitude given the ultimate workout this evening, and despite predictions of gloom and doom Chris Hughton’s men are capable of saving face.

Super, sizzling Manchester City, a side throbbing with attacking intent, are Albion’s first guests at the Amex and commentators and analysts are ganging up to suggest City will win at a canter.

At odds of 1-3 you won’t hear many punters or any bookmakers taking a different view, although the idea that the title favourites are going to blow away Brighton might be fanciful.

Modest sides with well-organised defences – the likes of Middlesbrough, Stoke and Southampton – all enjoyed relative successes against City last season.

And even though it’s arguable that City are a better attacking threat this season than they were last, Brighton may not subside.

Indeed, week one is probably not the worst time to be playing City as their new players settle into a new system.

An away win still looks the likeliest result but the price is nothing to latch on to. Backing City to win in a game featuring three goals or fewer, however, is odds-against and of greater interest.

Thirteen of City’s 23 wins last season were in games featuring three goals or fewer and one thing we know about Brighton is that, at Championship level admittedly, they are well-drilled. A league-high 21 clean sheets is a record to be proud of.

Brighton had the perfect dress rehearsal last weekend when they took on Atletico Madrid in their final friendly.

They didn’t see much of the ball but lost only narrowly with new keeper Mat Ryan at fault for one of the goals in a 3-2 loss.

It demonstrated, if reminders were needed, of the level of striker the likes of Lewis Dunk and Shane Duffy will be going up against this season.

It’s also a reminder of the defensive workload that Dale Stephens and new signing Davy Propper are going to need to do, plus the defensive qualities required of their wide men.

One of those, Anthony Knockaert, last season’s Championship player of the season, may not be involved in the season-opener because of injury though Chris Hughton’s wide men are going to be focusing far more on their defensive work than being a threat further forward.

Brighton are crying out for a striker and would love to ask searching questions of City’s new-look back three. Betfair go 21-20 that both teams score and City did concede a fraction more than a goal a game in 2016-17.

Albion will be a threat from set-plays with Pascal Gross’s passing and vision a real weapon in that department. He created 98 chances at Ingolstadt last season, in a team who went down.

Brighton should be able to ask questions of City’s defence though they won’t be anything like as challenging as the questions that Pep’s players ask of their rearguard.

City were the division’s top away scorers last season with 43 goals. Sergio Aguero notched in his last six road games in the league and he is 16-5 to open the scoring at the Amex.

Team news
Brighton
Beram Kayal is out with a broken leg and striker Sam Baldock with a calf problem. Anthony Knockaert is recovering from an ankle injury.

Manchester City
Ilkay Gundogan is close to a return from injury. Benjamin Mendy is out with a thigh problem.