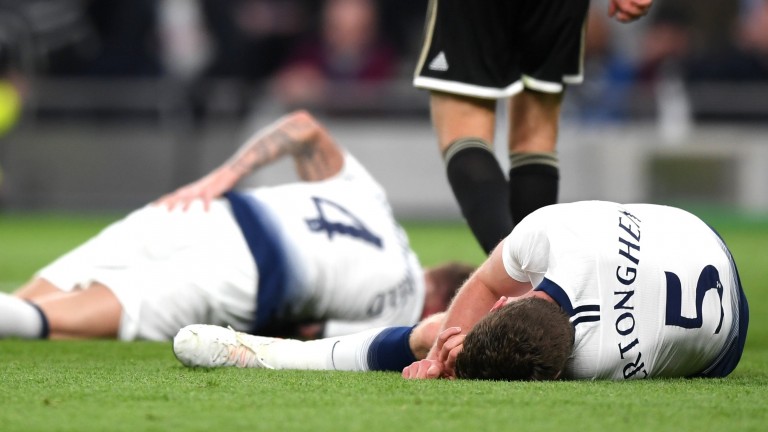 Jan Vertonghen and Toby Alderweireld clash during the Champions League semi-final first leg against Ajax
Shaun Botterill
1 of 1
By Dan Childs 11:57AM, MAY 3 2019

Tottenham are running out of players at a crucial stage of the season and they face going to Bournemouth without Jan Vertonghen, who suffered an ugly head injury during the 1-0 Champions League defeat to Ajax on Tuesday.

Vertonghen has undergone tests to ascertain whether he suffered concussion but he is certain to miss the trip to the south-coast which is key to Spurs' top four hopes.

On a more positive note Heung-Min Son should be raring to go after his midweek suspension and their attacking options are further boosted by the availability of Vincent Janssen, who was not part of the Lilywhites' Champions League squad.

Moussa Sissoko (groin) could make his first league start in three weeks after coming off the bench against Ajax.

Celtic need just one more point to seal the Ladbrokes Premiership title and they should fancy their chances at Aberdeen, where they have the advantage of facing injury-ravaged opponents.

The Dons are battling with Kilmarnock and Hibernian for a top-three finish but their squad is stretched to the limit with Graeme Shinnie, Niall McGinn, Gary Mackay-Steven, Connor McLennan and Tommie Hoban injured and Andrew Considine serving a suspension.

Mackay-Steven may return from an ankle injury this season but the only positive news this week is a possible comeback by right-back Shaleum Logan (ankle), who could make his first appearance since February.

Marcelo Bielsa decided to prioritise quality over quantity with his Leeds squad but he could be short of options going into the playoffs.

Striker Patrick Bamford was hit with an FA charge for successfully deceiving a match official after going down and holding his face following an altercation with Aston Villa's Anwar El-Ghazi during Sunday's Sky Bet Championship match at Elland Road.

He faces a two-game ban which would include the league match at Ipswich and the first leg of the playoff semi-finals.

Bamford's centre-forward berth is likely to be filled by Kemar Roofe, who has shaken off a hip injury.

But Barry Douglas and Ezgjan Alioski (both knee) will miss the rest of the season and Stuart Dallas picked up a knee injury last weekend.

Charlton have been on course for a top-six finish in Sky Bet League One for several weeks and manager Lee Bowyer has taken advantage of the situation by giving key duo Lyle Taylor and Patrick Bauer a break before the playoffs.

Top scorer Taylor (groin) and influential centre-back Bauer (knee) have been nursing minor injuries and were allowed to sit out the Addicks' 2-0 success at Gillingham last Saturday.

Bowyer's options have been boosted by the return to fitness of midfielder Jake Forster-Caskey and defender Lewis Page, who each completed 90 minutes as Charlton Under-23s defeated Wimbledon 4-3 on Tuesday.

Carlisle are one of five teams bidding for seventh place in Sky Bet League Two but manager Steven Pressley has doubts over two of his most influential attackers – Aston Villa loanee Callum O'Hare and Jamie Devitt – in the build-up to their clash at relegated Yeovil.

Pressley's side need a win to have any chance of sneaking into the playoffs but they may have to go into the game with a patched-up side.

Devitt – the Cumbrians' second top scorer with 11 league goals – suffered a hamstring injury during Carlisle's 1-0 success at home to Lincoln two weeks ago.

According to Pressley, Devitt has an outside chance of featuring at Huish Park while O'Hare (head injury) looks more likely to be involved despite missing training earlier this week.