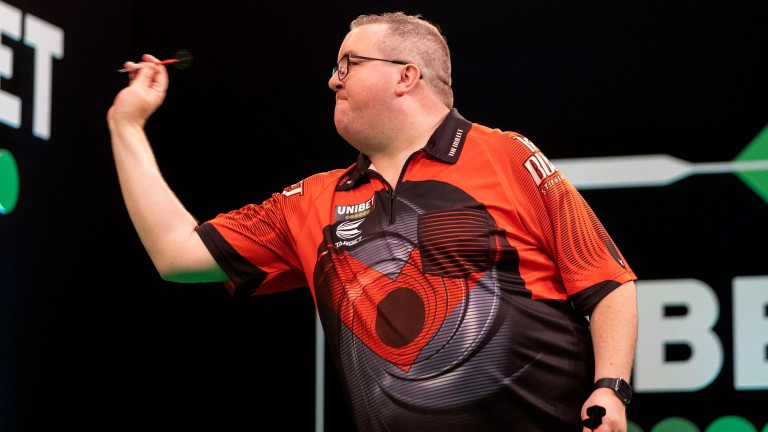 Under 6.5 180s in Stephen Bunting v Jose Justicia
1pt 11-10 Hills
Back this tip with William Hill

Three-time semi-finalist James Wade and former BDO champ Stephen Bunting make their entrances at the William Hill World Championship on Wednesday hoping not to be the latest seeds to fall by the wayside.

A glut of big names have already been bundled out at the first hurdle at Alexandra Palace which will make Bunting nervier than usual as the 1-3 shot prepares to tackle Jose Justicia. Wade makes his bow in the last match of the night.

A number of good Kiwis have qualified for Alexandra Palace and if Ben Robb is the cream of the crop right now then he’s obviously decent.

British arrers fans will have seen Robb averaging 96-plus beating Simon Whitlock and fractionally less losing to Rob Cross in the New Zealand Masters in the summer, so they’ll know he can play.

Ron Meulenkamp is a hard watch with a snatchy, ungainly style but it obviously works for him as he has reached four floor semis in 2019. He won a thriller against Diogo Portela at this stage 12 months ago and merits favouritism.

It’s very rare that an Asian player is preferred to a UK chucker but that’s quite rightly the case here.

World Cup semi-finalist Seigo Asada beat Kryzsztof Ratajski in the first round last year before controversially losing to James Wade. The Japanese ace has subsequently had another classy year on the Asian Tour and is even planning a shot at Q School.

All of that contrasts markedly to Mickey Mansell, who has had a terrible 2019 and memorably bowed out of this event 12 months ago averaging 74 against Jim Long. He has yet to win a game in four trips to Alexandra Palace.

Latvia’s Madars Razma just about gets the thumbs-up from the layers against Big H in a battle of the debutants.

This looks a horrible game to call given both players have been in dismal form over recent months.

Ward, 22, will hope to be able to summon up memories of his maiden Pro Tour win in May – beating Razma, Michael Smith and Nathan Aspinall – on the way though it’s anyone’s guess how he’ll deal with the big-stage pressure.

Jose Justicia booked his place in round two with a whitewash of Arron Monk but he averaged only 88 despite hitting almost 40 percent of his doubles and that’s an issue.

For the Spaniard to have any chance against a resurgent Stephen Bunting, he’s going to have to find some bigger scores.

Bunting looks the likely winner but he can get edgy and that would bring the quality down.

The latest child darts star to emerge from Europe is Nico Kurz, a 22-year-old with boyband looks and a big future.

The youngster looked almost embarrassed beating Gary Anderson in the German Masters earlier this year – pinging a 170 outshot during that success – but proved that wasn’t a flash in the pan by seeing off a clutch of Teutonic tungsten-tossers to qualify, notably the well-regarded Marin Schindler.

And so to James Wilson, the nuggety Yorkshireman who has overcome injuries arguably better than he has overcome an aversion to hitting big doubles under pressure.

That said, Jammy Dodger’s form is better than his nickname though this is a game which could run and run.

Brazil’s greatest darter - yes, it’s like being Uganda’s best skier, but anyway - has a fight on his hands against Josh Payne.

The Englishman has gone off the radar since reaching the UK Open quarters but should still have too much for Portela, who fell apart when leading Ron Meulenkamp 2-0 last year. That has to be a worry.

Germany’s unofficial No.1 Gabriel Clemens has beaten Benito van de Pas twice this year as the Dutchman continues his nosedive down the rankings.

Van de Pas has lost in the first round of his last six Pro Tour events and although he boasts a decent record in the worlds, that was when this awkward-looking chucker was in form. Right now he isn’t.

This should be routine for the German.