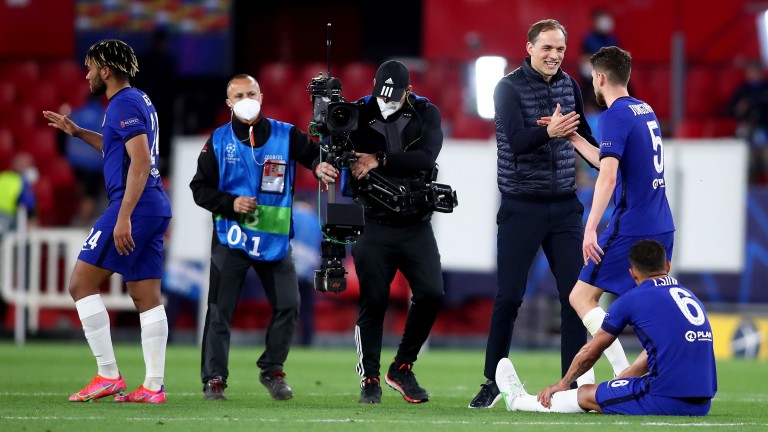 Thomas Tuchel's Chelsea take aim at a Champions League final
Fran Santiago
1 of 1
By Racing Post Sport 10:00AM, MAY 5 2021

Manchester City have done their bit and booked their place in the Champions League final and now the pressure is turned to Chelsea, who be will hoping to build on last week's 1-1 draw at Real Madrid.

It is a low-key Wednesday of footballing action, but there are three matches taking place in the Portuguese top flight.

Chelsea are fancied to seal their place in the Champions League final with victory at home to Real Madrid while Braga should be too strong for their Primeira Liga visitors Pacos Ferreira, who have scored only once in six away league games.

Just goal difference separates Maritimo and Gil Vicente in the Portuguese top flight but the hosts have won four of their last five, so they get the nod, before leaders Sporting, who remain unbeaten after 30 fixtures, complete the 14-1 fourfold by winning at Rio Ave.

Chelsea carried a greater attacking threat in last Tuesday's 1-1 draw in Madrid and they should be backed to complete the job with victory at Stamford Bridge. Real's defensive plans have been disrupted and that is an area the much-improved Blues can exploit.

Sporting are still on course to secure their first Primeira Liga title since 2002 and they can record victory at Rio Ave, who are winless in eight. Sporting have kept 18 clean sheets in 30 league games and only four of those fixtures featured four or more goals. Back Sporting to prevail & under 3.5 goals at 13-10 with Betway.

There were six bookings in the first leg in Madrid and the high stakes point to another fiery showdown. N'Golo Kante's position in the heart of Chelsea's midfield may be under a lot of pressure and he has picked up eight yellow cards from his 29 starts this season. The French international is 12-5 with Betway to go into the book.

Best bet
N'Golo Kante to be shown a card

Chelsea have kept ten clean sheets in their last 11 games at Stamford Bridge in all competitions.