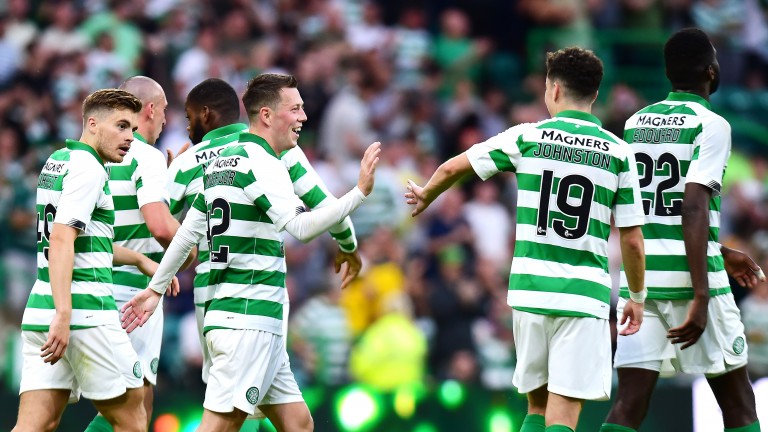 Celtic have been running riot in the Ladbrokes Premiership and Champions League qualifiers
Mark Runnacles
1 of 1
By Liam Flin UPDATED 2:37PM, AUG 6 2019

Celtic kick-started their pursuit of a ninth successive Scottish Premiership crown by hammering St Johnstone 7-0 on Saturday and the Bhoys' excellent form bodes well for the next chapter of their European voyage.

They take on Romanian side Cluj in the Champions League third qualifying round and look overpriced to take a first-leg advantage.

Even with the future of swashbuckling left-back Kieran Tierney hanging in the balance, Celtic are overrun with attacking players capable of breaching a feeble Cluj rearguard.

Dan Petrescu's team conceded two goals in each of their qualifying ties with Maccabi Tel-Aviv and Astana, sides from divisions ranked lower than Scotland (20th) in Israel (27th) and Kazakhstan (24th).

Ryan Christie bagged a hat-trick in Celtic's league opener, while Leigh Griffiths appears to be returning to goalscoring form and Neil Lennon's men could take a step closer to qualifying for Europe's elite competition.

Porto may struggle against Krasnodar in Russia

Porto are having to adjust to a summer exodus of key personnel with first-team defenders Eder Militao and Felipe and attacking midfielder Oliver Torres leaving for pastures new.

New additions Shoya Nakajima and Mateus Uribe, brought in from Al Duhail and America, are short of European experience and Russian outfit Krasnodar could capitalise when the sides meet at the Kuban Stadium.

Murad Musayev got the position of Krasnodar coach on a permanent basis after achieving a third-placed finish in the Russian Premier League and making the Europa League round of 16 last season.

They beat Sevilla and held Bayer Leverkusen and Valencia on home soil in that European run and, boosted by the astute signings of Tonny Vilhena, Marcus Berg and Remy Cabella, they could prove a cut above their Portuguese counterparts.

The Europa League dream is still alive for Dundalk but bookmakers rate the League of Ireland champions 13-2 to take the spoils at Slovan Bratislava in the third qualifying round.