Webb Simpson set to trap another trophy in California

Pan and McNealy can make an impact 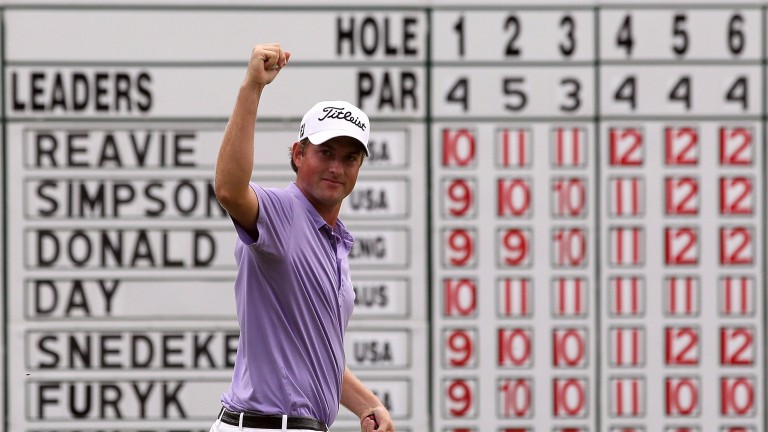 World number three Jon Rahm has jetted to California for the CareerBuilder Challenge, living legend Phil Mickelson is making his seasonal reappearance and US Tour formhorse Brian Harman is going to the well again. This week, though, could belong to a player who will not get any of the pre-tournament spotlight.

Webb Simpson is one of the US Tour grinders, who does not have the prettiest swing in the world, but gets results. In golf, it is not how you do it which counts, but how many, and Simpson has been overcoming his technical defects to produce some fantastic scoring in recent months.

A sensational weekend in the Sony Open has set up Simpson superbly for a crack at the CareerBuilder Challenge, which is played on a trio of short courses which will not expose his main weakness, a lack of driving distance.

Wondrous Webb was five under par for his last eight holes of round three in the Sony, completing a 63, then he made six birdies on his back nine in a final-round 65. Putting has been a bugbear for Simpson since the ban on anchored putters at the start of 2016, but he appears to have finally found a solution and he is starting to roll his rock with aplomb.

Simpson posted 13 top-20 finishes last year, including a playoff defeat in the Phoenix Open, fifth place at Colonial and third in the Wyndham, so fourth place in the Sony was a continuation of his good form. He would probably be on a run of six consecutive top-20s had he not withdrawn from the RSM Classic at the halfway stage, having opened with rounds of 67 and 68, to be at the bedside of his dying father. This is a four-time US Tour champion enjoying a resurgence at the age of 32.

The toughening-up of La Quinta can only help Simpson's cause. The dynamics of this tournament have changed since the return of the Stadium Course in 2016 and none of the three tracks being used this week are easy. The 2012 US Open champion, who won his lone Major title in California, seems likely to relish the assignment.

Simpson has been finding greens in regulation for fun and should be deep in contention on Sunday if his putting improvement continues.

These courses are not ideal for Rahm, who finished 34th on his CareerBuilder debut last year, Mickelson remains winless since the 2013 Open, while Harman must be getting down on himself about failing to turn good golf into winning golf in all five of his US Tour outings this season. Harman was unimpressive in the final group of the Sony on Sunday.

There are chinks in the armour of everyone in this field and the event looks ripe for a big-price winner. Aside from a decent wager on Simpson, two talented outsiders are recommended at enormous odds.

Cheng-Tsung Pan, a star at the University of Washington in his college days, was the number one amateur in the world for eight weeks in 2013 and has always been expected to become a US Tour champion. He started professional life on the Canadian Tour, quickly winning twice.

Last season, after graduating immediately from the Web.com Tour, Pan quickly made an impact as a US Tour rookie, finishing sixth in the RSM Classic and second in the Farmers Insurance Open. That bold effort in the Farmers – a January event in California – bodes well for his hopes of a CareerBuilder title tilt.

Pan was eighth in the Travelers Championship in June and 13th last time out in the RSM Classic, where he signed off for 2017 with a final-round 67. The Taiwan-born 26-year-old is full of potential, finds lots of fairways and churns out greens in regulation. The CareerBuilder could be exactly that for Pan – a building block towards great things.

California has produced some all-time greats of golf, including Tiger Woods, and Maverick McNealy could be the latest superstar to emerge from the Golden State. McNealy finally decided to focus on golf rather than business, turning professional in September, and he had a 22nd birthday party in November knowing he has a glorious future ahead.

McNealy, born and bred in California, went to Stanford University, where Woods made his name, and both men graduated after putting some incredible numbers in the book. McNealy is in the embryonic stages of his pro career, but tenth place in the Web.com Tour Q-School last month immediately earned him a spot on the feeder circuit, and sponsors invites to US Tour gatherings are inevitable given his obvious potential.

McNealy's father, Scott, is a computer software billionaire, so plenty of money can be pumped into backing the development of Maverick. The early evidence suggests he will become an elite player sooner rather than later, and this home-state gig in a weak field is a chance to show off.

Others to note
Bill Haas
A two-time winner of this event and a six-time US Tour champion. In humdrum form, but worth a second glance at 50-1.

James Hahn
The Californian turned into Superman in the final round of the Sony Open on Sunday, making nine birdies before losing to Patton Kizzire on the sixth hole of a playoff.

Beau Hossler
Another dangerous Californian who will enjoy teeing up in front of family and friends. Missed the cut last week due to an hour of madness (five shots going in four holes of round two), but the improving youngster could make waves at 250-1.

Hudson Swafford
The hero of last year must be respected on turf at which he produced a late masterclass to make his breakthrough, but he is not playing as well as he was 12 months ago.

Kevin Kisner
The Colonial champion has the right game for these layouts and has been playing well, but he hates poa annua greens and has a poor record on the west coast, so he could struggle with putter in hand.

Zach Johnson
The 2015 Open champion battled through illness to finish 14th in the Sony on Sunday. He is in solid nick, but has never won in California.

When to bet By 4.30pm Thursday

Time difference California is eight hours behind the UK & Ireland

Course overview Various layouts have been used through the years for this pro-am, which was previously the Bob Hope Chrysler Classic and a 90-hole, five-day event.

Indian Wells, The Classic Club and Bermuda Dunes were popular courses axed from the four-track roster, then Silver Rock bit the dust in 2012 to allow the event to become a 72-hole, four-day affair. In 2016, two tracks were culled. The Palmer Private, which hosted 36 holes the previous four years, made way along with the Nicklaus Private. The Stadium Course returned after a 29-year absence to act as host, and the Nicklaus Tournament Course made its debut. One round is played at each of the tracks over the first three days, with the cut-makers gathering at the Stadium Course on Sunday. The Stadium Course, designed by Pete Dye, is full of deep bunkers and water, has similarities to the TPC Sawgrass and is the most difficult. The two newest tracks have plenty of undulation in their greens. La Quinta has traditionally been the easiest on the rota, but has been toughened up this year, with more than 50 trees planted and some new bunkering. The Stadium Course and the Nicklaus Tournament Course were both used for the US Tour Qualifying School Finals in 2002, 2006 and 2008

The story of last year Hudson Swafford performed heroically over the final four holes, making three birdies to claim a US Tour breakthrough, defeating Adam Hadwin by a shot

Weather forecast Clear but cool throughout, with light breezes

Type of player suited to challenge Having a hot putter was enough to contend in this tournament in the past, but the venue changes put more of an emphasis on ball-striking, underlined by the victory of greens-in-regulation machine Jason Dufner in 2016.The two new tracks do not yield as many birdies as the two which were axed. Putting arguably remains most important, but the penalties for errant tee-to-green work are more severe, so strong all-rounders are favoured