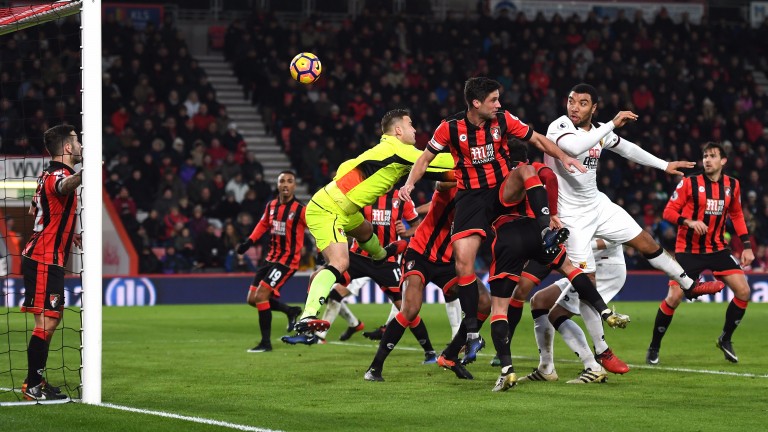 Millwall cruised to a 3-0 victory at home to second-string Bournemouth side in the FA Cup third round but they are unlikely to take another Premier League scalp when they take on Watford at the Den.

The timing of the fixture is tricky for the Hornets, who face Arsenal in a Premier League match at the Emirates on Tuesday.

But Watford manager Walter Mazzarri is unlikely to repeat the mistake of Bournemouth manager Eddie Howe, who fed the Cherries’ reserves to the Lions by making 11 changes from the previous fixture.

The upshot was a very uncomfortable afternoon for Bournemouth, who failed to register a shot on target.

Bournemouth were powder-puff in attack and their defence featured three players (Tyrone Mings, Marc Wilson and Jordan Lee) who hadn’t started a Premier League game this season and one (Brad Smith) who had featured on just three occasions.

Millwall took full advantage of the Cherries’ dodgy defence by getting the ball forward early to physical frontmen Lee Gregory and Steve Morison at every opportunity.

The tactics will be similar against Watford but they will be up against a more streetwise rearguard.

Watford like to play with three physical centre-backs and their tactics should be ideally suited to combat the aerial bombardment which will come their way.

There will probably be changes in personnel which give a nod to the midweek match against Arsenal but Watford’s squad are in far better shape than they were before the 2-0 victory at home to Burton in the FA Cup third round.

The Hornets were down to the bare bones and Mazzarri handed a first start to left wing-back Brandon Mason, who rewarded him by providing an assist for the Hornets’ first goal.

Nineteen-year-old midfielder Carl Stewart came off the bench to make his professional debut and fellow academy graduates Michael Folivi and Andrew Eleftheriou were on the bench.

Mason’s promise was recognised when he was named among the subs for last Saturday’s 2-2 draw at Bournemouth and he is a confirmed starter against Millwall. But the rest of Watford’s youngsters are having to be patient because the squad has been boosted by a combination of new signings and players returning from injury.

Watford’s attacking options increased this week with the signings of Mauro Zarate on a permanent deal from Fiorentina and M’Baye Niang on loan from Milan, although Zarate has a two-game ban carried over from his time in Italy.

However, there is plenty of firepower at Mazzarri’s disposal with Niang, Troy Deeney and Stefano Okaka competing for selection alongside Jerome Sinclair, who is being handed a chance to add to the stunning goal he scored in the last round.

Another January signing, Everton loanee midfielder Tom Cleverley, has made a positive impression and Watford’s squad are looking better equipped for the final four months of the season than they were for the opening five.

Top-flight survival is the overwhelming priority but Watford showed a professional attitude when they defeated Burton in the last round and a similar approach can see them through a tougher match at Millwall.

Team news
Millwall Shaun Hutchinson and Harry Smith are unavailable but Millwall have no fresh injuries to contend with.

Watford Adlene Guedioura is back from the Africa Cup of Nations but Isaac Success will not return to full training until Monday. Mauro Zarate has a two-match ban to serve but fellow new signing M’Baye Niang could make his debut. Jose Holebas starts a two-game ban and Jerome Sinclair and Brandon Mason have been told they will start.