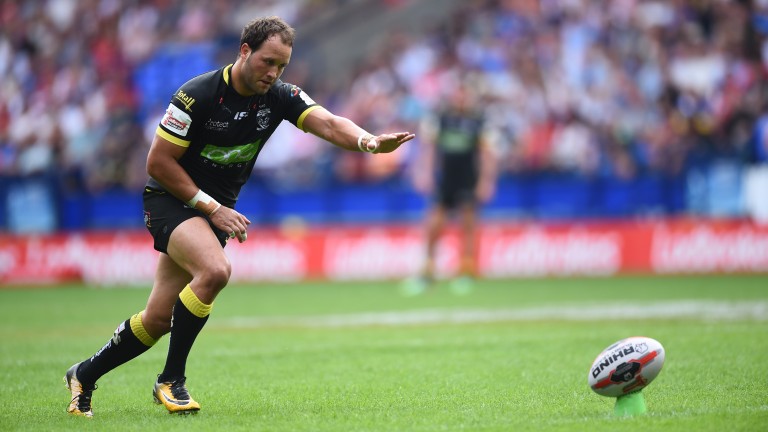 Earlier this month, rugby league clubs voted to scrap the Super 8s structure at the end of this season.

One of the main reasons was the lack of interest in fixtures between the elite clubs with all the focus on clashes between the lesser lights in the Qualifiers.

This weekend’s matches bear that out. Warrington versus St Helens should be the headline act but instead the three games pitting Betfred Super League sides against Championship clubs are the centre of attention.

The Wolves and Saints are set to meet again at the Totally Wicked Stadium in the playoffs in a fortnight but Warrington have home advantage for the dress rehearsal.

Sky Bet go 10-11 Warrington and that looks the bet on an afternoon when it’s unlikely that teams will be at full tilt.

The Wolves led 8-0 at half-time at Saints two months ago before succumbing 14-12 to a last-gasp Danny Richardson penalty.

The standout bet on the card is in Toronto, where for the first time in their short history, the Wolfpack are underdogs at home.

Even more amazingly, visitors Widnes are favourites despite winning only twice in 22 games. Their last away win came a year ago.

Toronto have performed at a higher level than the Vikings in the Qualifiers. Last month they went off four-point favourites at home to Hull KR before losing 28-22.

Rovers are a much better side than Widnes and the Canadians look good business with a two-point start.

Elsewhere KR and Salford are strong favourites on their travels to Toulouse and London respectively.

Rovers have Danny McGuire back for their French assignment but still have several stars missing so the game looks best left alone, but London merit support with a start of 14 against the Red Devils.

The visitors have talisman Jackson Hastings banned and forwards Lee Mossop, Lama Tasi and George Griffin are all out injured.

The Broncos have a strong home record this year and only Leeds have beaten them by more than the handicap line for this game in the Qualifiers.