Wallabies primed to put up a fight in Twickenham battle

England's unbeaten record on the line 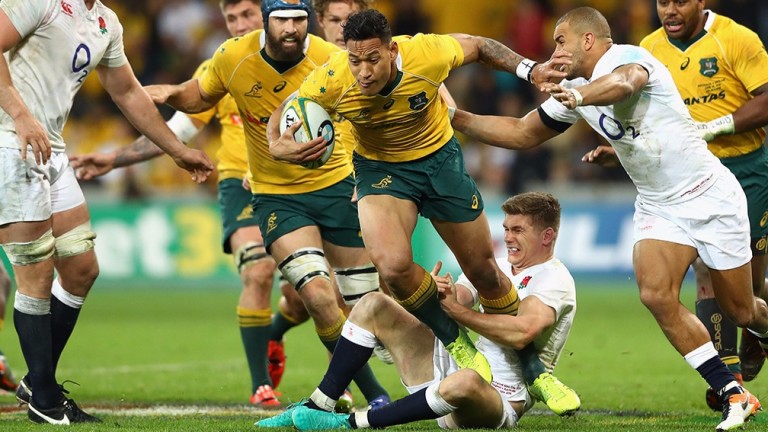 The last of the autumn internationals has crept into the winter months and the stage is set for a dramatic finale as England put their unbeaten record on the line against old foes Australia.

The rugby rivalry between the nations has ramped up even further over the last year as first the Wallabies dispatched England from their own World Cup with victory at Twickenham last autumn, and then England recorded a historic 3-0 series sweep in the Aussies’ own back yard in the summer.

The humiliation was even greater for the Wallabies as England put them to the sword with an Australian coach at the helm in Eddie Jones, and the war of words between him and Aussie counterpart Michael Cheika has stirred the pot nicely.

England are aiming to complete the year with 13 victories out of 13. Australia saw their hopes of an autumn slam ended with defeat to Ireland last week, but they would still go out on a high with a success.

A schedule of five Tests against the northern hemisphere’s top teams was an ambitious target but Cheika has played his hand well, resting most of his first-choice side against France in the middle of the fixture list.

The fatigue factor will be talked up in the build-up to this match but there is no doubt the Aussie players will be up for this clash. Certainly a double-figure handicap looks big and the visitors are worth backing to put up another competitive dispay.

Indeed, England have had the bigger selection issues this week after number eight Billy Vunipola injured knee ligaments against Argentina last week and faces a spell on the sidelines.

The Saracens man has been England’s most devastating ball-carrier, and Wales’s struggles this autumn without Taulupe Faletau, a player very much from the same mould, have shown how significant that big physical presence can be.

Replacement Nathan Hughes is a similar player but does not have Vunipola’s experience, and with Maro Itoje having been ruled out for the entire series, England are now without their two best forwards.

Three wins from three reads well for England but none of South Africa, Fiji or Argentina were at anything like their best, and a three-point defeat for Australia in Ireland last week shouldn’t detract from a decent showing this month.

The Wallabies have scored at least 20 points in all four matches, with try totals of five, two, three and three, and they can usually be relied on to put points on England.

In only two of the last 15 clashes between the two have England scored more tries than Australia, and the home side shipped at least two tries in each autumn Test. They shipped three against Fiji, and with Jonny May and Marland Yarde on the wings, both of whom have had question marks over their defence in the past.

With the pace in their backline Australia should find some gaps and dangerman Israel Folau appears generously priced at 9-4 to score a try.