Vijay Singh could turn back the clock at Harbor Shores

Langer and Stricker not in the field 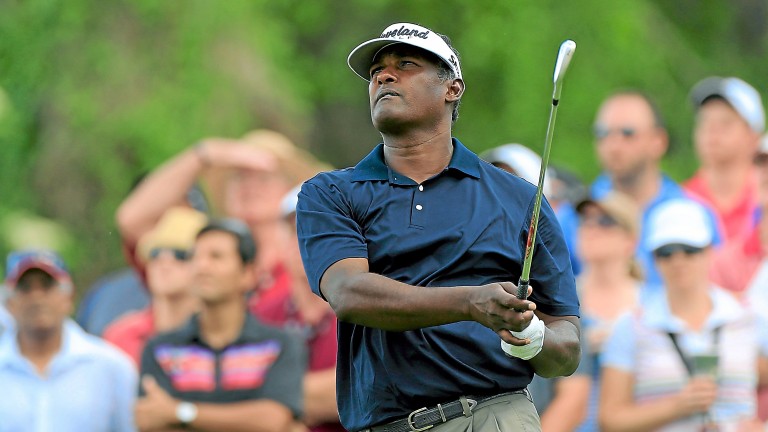 The second Champions Tour Major, the Senior PGA Championship, has had the guts ripped out of it by the defections of Bernhard Langer and Steve Stricker, who would have dominated the betting.

Great family man Langer has swerved his title defence to attend the high-school graduation of his youngest son, while Stricker has opted for Colonial on the main tour, a tournament he won in 2009.

This leaves last week’s Tradition winner Miguel Angel Jimenez as favourite and it was good to see the 54-year-old Spaniard finishing the job off for his first senior Major as he has had chances before and faltered on Sundays.

Donning the mantle of favourite and trying to win back-to-back Majors are two pressure points The Mechanic didn’t have last week but to balance that comes the confidence of now knowing he can do it at this level.

This looks a golden opportunity for Vijay Singh, who scored his first victory for almost ten years with the Toshiba Classic in March. Putting has been his problem for a long time, explaining why he is still a 14-1 shot despite this week’s weakened field.

A double Major champion and number one in the world in 2004 in his heyday, the Fijian looked nailed on to coin it on the Champions circuit but it hasn’t happened yet and at 55 there may not be many more realistic chances.

The PGA returns to Harbor Shores in Michigan for the fourth time and has been a happy hunting ground for the Brits with journeyman Roger Chapman winning in 2012 and Colin Montgomerie two years later.

Monty also made a bold stab in 2016 but had to play second fiddle to Rocco Mediate’s brilliant 19-under record. Although joker Rocco hasn’t won since, his eighth at The Tradition was a perfect warm-up for the PGA and the 50-1 is a tasty price.

Nothing on Monty's 2018 record suggests he is going to be a factor but, having been 29 under for his eight course rounds, the Scot may have a new spring in his step.

Kelly is a two-time winner this year and second favourite, McCarron was fifth at the weekend and seventh at Harbor Shores two years ago when Jobe was third, but Durant and Estes appeal more at the prices.

They are plodders you wouldn’t cross the road to watch and Estes rarely plays because of pollen allergies. But the Texan was eighth on Sunday and fifth on his only other 2018 start, while Durant, joint runner-up to Jimenez at The Tradition, ran fifth here four years ago.

When to bet By 1pm

In 2012 it produced a shock winner in English journeyman Roger Chapman and 2014 saw Colin Montgomerie continue the British love-affair with Michigan but in 2016 Rocco Mediate broke the British stranglehold by beating Monty by three.

Fairly generous off the tee, it's a second-shot course with distance control the key to success. Fiercely undulating greens demand a deft touch. The hardest hole is the 430-yard seventh uphill to a very narrow, well-guarded green

Weather forecast Warm (up to 28C) but overcast all week until cooling down on Sunday. Some rain on Saturday