Vettel can make up for missing out on pole in Brazil 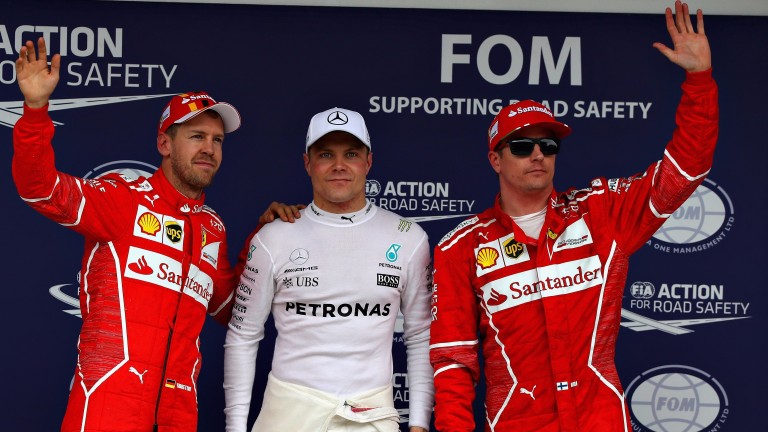 Valtteri Bottas (centre) could have his work cut out to keep the Ferraris of Sebastian Vettel (left) and Kimi Raikkonen at bay
Mark Thompson
1 of 1
By Adam Scriven 5:45PM, NOV 12 2017

Background
The Brazilian Grand Prix field starts as a Mercedes sandwich with Valtteri Bottas on pole and newly-crowned world champion Lewis Hamilton at the back.

Hamilton made an uncharacteristic error and crashed before completing a lap in qualifying while Bottas took full advantage and denied Ferrari's Sebastian Vettel by 0.038 seconds.

Also starting out of place will be Red Bull's Daniel Ricciardo, who qualified fifth but begins the race 14th after engine-change penalties.

Top tip
Sebastian Vettel 7-4
Bottas's stock has fallen since he got himself into title contention with some impressive mid-season performances, but the Finn is odds-on to earn his first win in ten races.

Mercedes have taken 1-2 finishes at the last three Brazilian Grands Prix and have looked on top all weekend.

Bottas will be looking forward to show what he can do when not hampered by the car's tendency to struggle while running in traffic - this is his first front-row start since his win in Austria.

However, Vettel would probably be on pole had he managed a tidier final lap and race simulation runs in practice give him every chance.

Vettel has won only once from his four pole positions this season, but he has taken three wins from further back, so he shouldn't be too disappointed.

The championship is out of reach now for Vettel, but he leads Bottas by a precarious 15 points for second place, so he shouldn't lack for motivation.

Other markets
Felipe Massa points finish 5-6
Felipe Massa was given a guard of honour as he returned to the garage after crashing out of what was thought to be his 13th and final home race last season.

Having recently announced his retirement (again) the popular Brazilian has one more chance to go out on a high and is worth backing to finish in the top ten.

Massa will start the race ninth but looked set to qualify much higher before being impeded in the final segment of the session.

Hamilton and Ricciardo will probably find their way past if they stay out of trouble but Massa has scored points in seven of his last nine races and looks capable of improving that record.

In the other two races in that sequence he missed out by just one place, finishing 11th.