Venus Williams ready to keep Australian crown in the family

Mladenovic a huge price to return to form 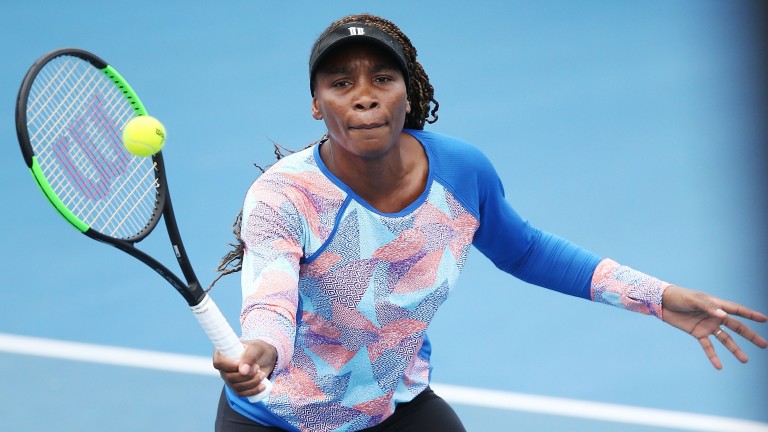 Venus Williams could be a huge title threat if overcoming Belinda Bencic in her opener
Michael Dodge
1 of 1
By Adrian Humphries 8:00PM, JAN 13 2018

Humphries’s top tip
Venus Williams 33-1
Had she been fit and well, Serena Williams would have taken the beating in the first Grand Slam of the year, but that wasn't to be for the new doting mother and punters have to look elsewhere for the Australian Open winner – but maybe not too far removed from the original thinking.

There’s a potentially fantastic form line for Melbourne Park and punters would be wise not to dismiss it easily – with Serena out of the picture, back the player who lost to her in last year's final.

There's no 100-1 about 2017 Aussie Open runner-up Venus Williams this year, but 33-1 could still prove a generous price.

It's hugely annoying to find Venus opening against Belinda Bencic, who looks a Grand Slam champion in waiting. But while the latest Swiss Miss is back in the ascendancy in 2018 after an operation on her left wrist last year, winner's medals at the Hopman Cup and Kooyong Classic do not mean she's a good thing to defeat Venus.

Bencic may well win, but fifth seed Venus is ranked 72 spots higher than her opponent in the pre-tournament rankings and it should not be forgotten that the American remains one of the finest match-players the sport has ever seen.

Venus lost to in-form Angelique Kerber in three sets in her Sydney curtain-raiser last week, but it may pay not to dwell much on that result because the 37-year-old proved last year that she still has what it takes to post a telling run down under.

The selection is in the same quarter of the draw as Elina Svitolina, who is shading Simona Halep for outright favouritism, but with Sloane Stephens having been below par since her US Open victory in September there may be nobody to stop Venus should she survive her ultra-tough opener.

Things turned sour for Mladenovic in the second half of last season, but it should not be forgotten just how good the first half of the campaign was for the Frenchwoman.

If the draw goes to plan down under, we could see a vitriolic encounter between Mladenovic and her compatriot Caroline Garcia in the last 16.

But while Garcia is a fine performer, she doesn't possess the innate power and poise of her Fed Cup teammate, who did not play that badly in a close loss to Brisbane finalist Aliaksandra Sasnovich in her 2018 opener.

Mladenovic goes to Melbourne under the radar and, at the available prices, she can definitely be chanced.

Other selection
Sam Stosur to win fourth quarter 80-1
It can only ever be a hope, or even a ruse, supporting Sam Stosur in her homeland, but should the Brisbane native find the sort of form that took her to a US Open triumph in 2011 and a French Open final a year earlier, then she could still be a big runner at Melbourne Park.

The legendary Evonne Goolagong Cawley, a four-time Aussie Open heroine in the 1970s, would probably head the betting if the Margaret Court Arena was to be renamed. But aged 33 Stosur still has time to throw her hat into the ring and it may be worth taking a chance on her in the coming fortnight.

She's 500-1 outright, which can be considered, but Venus could prove a huge semi-final stumbling-block so instead take the 80-1 about her surprising all in the bottom quarter.