Varner and Scott set to duel for Gold Coast glory 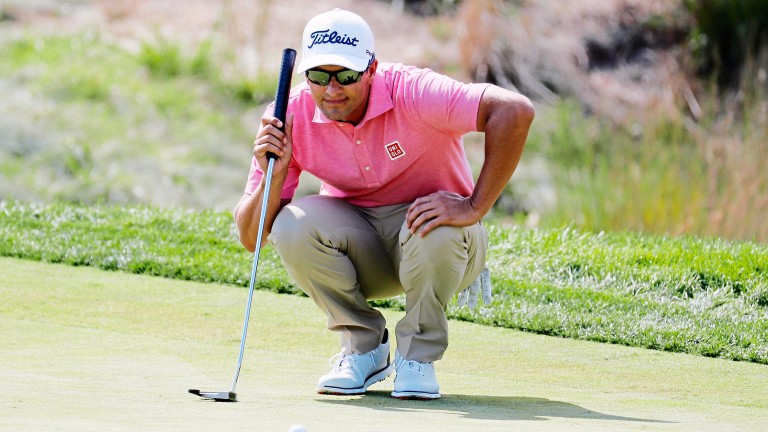 Ante-post 200-1 rag Andrew Dodt leads the Australian PGA Championship with 18 holes to play, the Queenslander reaching 14 under par in his home state.

Dodt has been frontrunning all week at the Royal Pines Resort on the Gold Coast, carding a third-round 70 to keep his nose in front. Two shots behind in a tie for second are his compatriot Ashley Hall and American raider Harold Varner.

Pre-tournament favourite Adam Scott, a stand-out 4-1 with Betfair, is sharing fourth place. Scott is 7-2 for what looks like a five-runner race unless New Zealander Ryan Fox produces serious Sunday firworks.

Adam Scott is fractionally shorter than he was before the tournament started and a more attractive option with one round to go than he was with four.

Scott had 155 players to beat before the off, but there appears to be only four left to overcome unless Ryan Fox goes birdie crazy in the final round. Given how poor Fox was yesterday, dropping three shots in his first five holes, the Kiwi does not seem in a good place mentally to conjure the round in the mid-to-low 60s that he requires.

Andrew Dodt has been excellent for 54 holes, plotting his way expertly along Royal Pines, and he won the 2014 Queensland Open on the Australasian Tour. Dodt has won twice on the European Tour in Asia. The 30-year-old has not been convincing enough in contention on other occasions, though, to be trusted at a best-price 15-8.

Ashley Hall won the Victorian PGA in February for a breakthrough success and he was a playoff loser to Jordan Spieth in the Australian Open last time out, but the world number 368 is generally disappointing, while John Senden is notoriously fragile in tight final-round combat.

The two best value options at this stage are Scott and Harold Varner, with Varner slightly preferred. Scott lost control of his driver in round three, twice finding water off the tee, and the world number seven will need to quickly improve to overcome a four-shot Sunday deficit.

Varner's four-under-par third-round back-nine was hugely impressive and the American approaches round four full of confidence. An immense 400-yard drive at the 15th hole set up an eagle, then he produced another one at the par-four 17th. HV3 is bursting with power.

Varner was rough round the edges when he joined the US Tour at the start of this season, but the 26-year-old has matured nicely. He was a play-off loser in last year's Oz PGA at Royal Pines and can go one better 12 months later.

Varner is two shots ahead of Scott, an advantage which could prove decisive unless Scott rediscovers his A-game overnight. It also helps that Varner is in a threeball with Dodt and Hall, who will almost certainly be equally as nervous as him, so he will not get any intimidation from the best player in the field.

Cameron Smith finished like the proverbial train in the Australian Open last time out and the local lad looks the best final-round threeball option. Smith, prone to a sluggish start, has slowly but surely moved through the gears this week and can be fancied to produce his best golf of the tournament in round four, alongside Marc Leishman and Ross Kellett.

FIRST PUBLISHED 11:49AM, DEC 3 2016
It also helps that Varner is in a threeball with Dodt and Hall, who will almost certainly be equally as nervous as him, so he will not get any intimidation from the best player in the field
Bookmaker
Price
E.W. Terms
bet365
Open Account
Ladbrokes
Open Account
William Hill
Open Account
Coral
Open Account
Paddy Power
Open Account
Betfair
Open Account
Sky Bet
Open Account
Sporting
BetVictor
Boylesport
888sport
TODAY'S OFFERS
TODAY'S BOOKMAKER OFFERS
Exclusive to new customers: