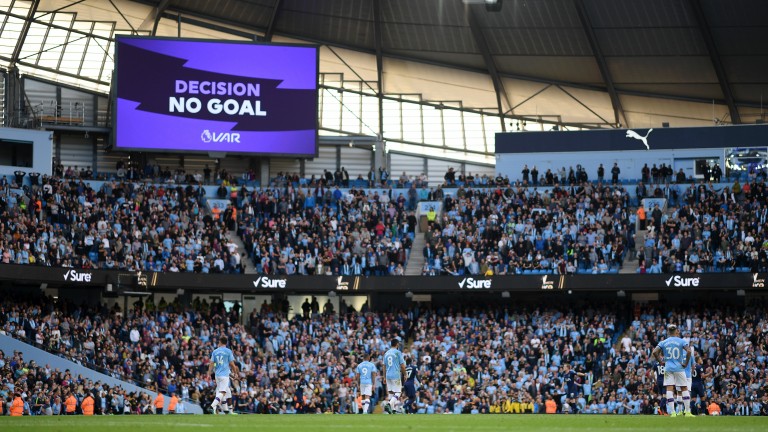 The big screen shows the VAR decision of 'No Goal' for Manchester City
Shaun Botterill
1 of 1
By Kevin Pullein 7:00PM, AUG 22 2019

Nearly everyone has missed the meaning of the new handball rule. It does not say what they think it says. VAR should not have disallowed what would have been an injury-time winner for Manchester City against Tottenham.

Nearly everyone says VAR was right, but the rule is wrong. They are mistaken. VAR, like almost everybody else, misinterpreted the rule.

This is what the rule says: “It is an offence if a player gains possession/control of the ball after it has touched their hand/arm and then scores in the opponents’ goal or creates a goalscoring opportunity.”

The player penalised at the Etihad on Saturday was Aymeric Laporte. He tried to get his head to a corner but missed, and afterwards as the ball passed him it hit his arm.

The rule poses two questions. Only if the answer to both of them is yes should a player be punished.

The same thing happened the previous Sunday when VAR Jonathan Moss, also assisted by Halliday, disallowed what would have been a winning goal for Wolves against Leicester at the King Power because the ball had struck the arm of Willy Boly.

And what should have happened according to the rule is what ought to have happened according to almost everyone who plays or watches football. At neither game did any of the players or managers or any of the spectators think the goal should have been disallowed. Leicester and Tottenham fans chanted support for VAR, but with laughter in their voices. They knew that what had happened was ridiculous.

How will VAR affect betting? It could reduce the number of goals, contrary to what most observers anticipated, and then the best teams will win less often. In short, games could become even less predictable.

Two of the first 20 Premier League games with VAR ended with the wrong result and would not have done without VAR.

How does VAR work in the Premier League? It could change as we go on, and hopefully will, but after two weeks this is a fair summary: every time the ball goes in the net a group of officials watch replays and try to find a way to disallow the goal on a technicality.

In the Bundesliga, Serie A, La Liga and Ligue 1 fewer goals were scored in the first season with VAR than in the last season without VAR. Typically there were between one and two goals fewer in each round of fixtures, which is also the experience, albeit after only two rounds, in the Premier League.

The introduction of VAR and reduction in goals could be coincidental. So let us insist only on this: there is nothing in the evidence to suggest VAR produces more goals.

There are, broadly speaking, two influences on scores. Skill and luck. Luck evens things up a bit. In any game it is as likely to favour the weakest team as the strongest. You could say that luck erodes differences in skill.

Handball law: do what they say – but what are they saying?