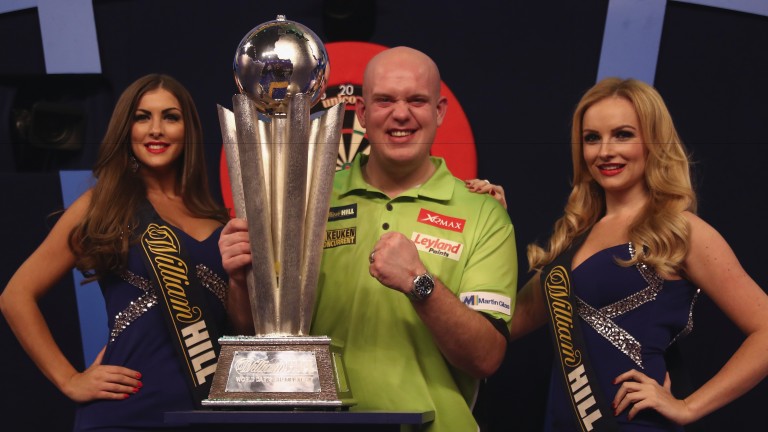 Punters who sense Michael van Gerwen is on the verge of an era of darting dominance following his stunning triumph at Alexandra Palace on Monday night might want to pile into Betfred’s 4-5 that he retains his William Hill World Championship crown in 12 months.

Van Gerwen kicked off 2017 by lifting the Sid Waddell Trophy following a stunning 7-3 defeat of defending champion Gary Anderson and Coral are as short as 1-2 that he’s still holding the cup this time next year.

The Dutchman has taken the sport to new heights over the last three weeks – his semi-final demolition of Raymond van Barneveld 24 hours before he battered Anderson was arguably the greatest display of tungsten theatrics ever seen on TV.

And bookies have no doubt that Van Gerwen’s gold rush will continue in the Premier League, which starts in Newcastle on February 2.

Again it’s Betfred who are prepared to take on the Green Machine, going a top-price 4-6 that the world number one wins the event which culminates in finals night in London on May 18.

Anderson was yesterday installed 8-1 second favourite with Taylor a distant 14-1.

Next stop on the darting carousel is the Lakeside Country Club in Frimley Green on Saturday for the start of the BDO World Championship and they too have a clear favourite.

Glen Durrant is best-priced 15-8 to convert his top seeding into a first world title, something he failed to do 12 months ago. It was Scott Waites who did for Duzza in the quarter-finals last January before going on to collect a second Lakeside victory, and the Yorkshireman is 12-1 to collect a third title.