Van Gerwen irresistible but Durrant could do BDO proud 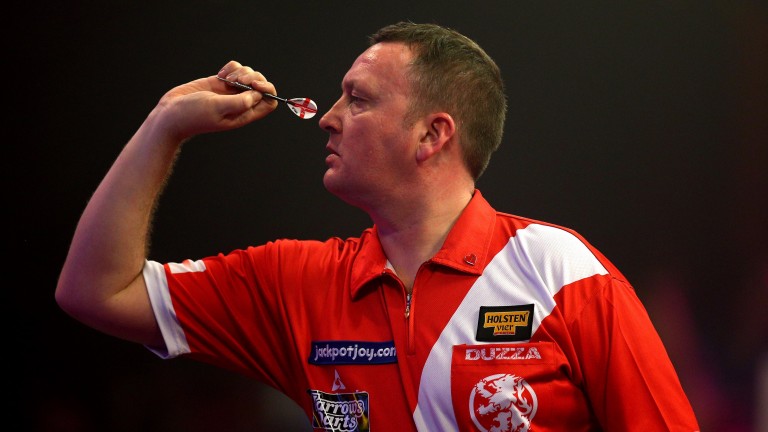 Eight different world champions take centre stage in Wolver­hampton for the coming week’s Grand Slam of Darts, though there’s only one who the layers want to see beaten.

Michael van Gerwen, who is continuing to set the darting bar higher and higher, is in such a rich vein of form that he goes off at a Phil Taylor-esque price to retain the title he won so magnificently last year.

Mighty Mike is the proud winner of 23 titles in 2016, a feat of unprecedented dominance, and it’s hard to see anyone stopping the odds-on favourite this week.

With all respect to his opponents and the fact that the round-robin group stage is played over the briefest best-of-nine legs format, Van Gerwen has a virtual bye into the semis where, formbook dependent, Taylor lies in wait.

Each-way thieves might therefore want to look at the other half for some tournament value, a half where Gary Anderson is the stand-out act. That said, the Scot has been beaten in the first round of his last two TV events in recent weeks.

So at a big price – and let’s face it, they’re all big prices with Van Gerwen taking so much out of the book – chuck a dart at Glen Durrant, the BDO’s flag bearer-in-chief at 66-1 or Dave Chisnall, also in good form, at 28-1.

The beauty of the Grand Slam is the group section for round one, especially with the matches being played over a short distance. It means there will be surprises.

Group B, for example, looks wide open and Gerwyn Price definitely has the game to get the better of favourite Scott Waites and next-best Robert Thornton.

Price has to be heartened by the fact that he had a shot at beating Van Gerwen in last week’s World Series and he remains a tough man to beat.

Simon Whitlock is back to somewhere near his best again after a poor year or so and should fancy his chances of eclipsing Peter Wright, Jeff Smith and qualifier Ted Evetts.

Ian White looks a big price to beat The Power in Group D as well. Taylor has lost group games before and White, much better at this stage before the pressure is on, clearly has the form to trouble anyone over a short course.

In terms of day one match bets, there are a trio of BDO stars who look seriously overpriced.

Adrian Lewis, who used to be a regular group-stage casualty in the early days of the Slam, evidently has the game to batter anyone. But he cannot always be trusted to gate quickly and 2015 Lakeside champ Scott Mitchell is just the sort who could take advantage.

Mitchell looks a fancy price and so too is Smith to take care of Wright. The Canadian, a beaten finalist at the Lakeside last year, is a rock-solid shooter who will hit his doubles.

Local lad Jamie Hughes will have the crowd on his side and can give them something to shout about by pushing James Wade all the way.