Oleksandr Usyk looks ready to prove himself in the heavyweight division 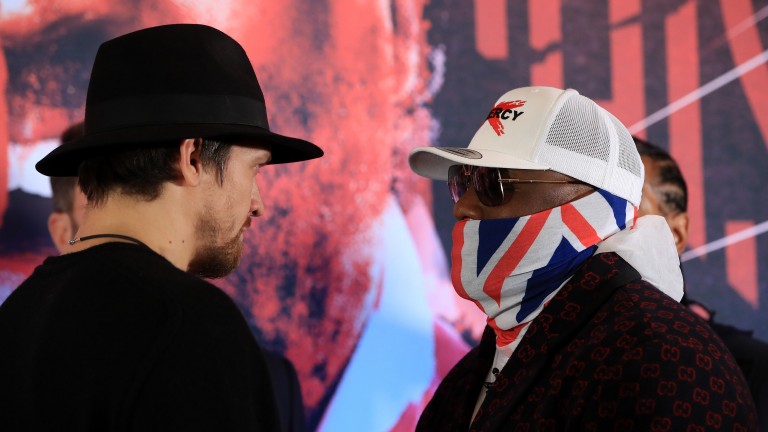 Dereck Chisora takes on Oleksandr Usyk in a heavyweight Halloween clash and the London fighter may be in for the shock of his life.

Usyk is a former Olympic champion, a unified cruiserweight champ and one of the best pound-for-pound fighters on the planet.

Chisora isn't at the Ukrainian's level in terms of boxing ability but can Usyk bridge the gap in terms of weight?

The Ukrainian has made the step-up to heavyweight after dominating the cruiserweight division.

The southpaw beat German Marco Huck in his own back yard to claim the WBO title, before travelling to Russia and unifying the division when defeating Murat Gassiev.

There's are doubts that have been sown about Usyk's ability to carry his punching power up the divisions and whether he can take a heavy shot from a big fighter. However, the Ukrainian isn’t moving up from middleweight to heavyweight, it’s cruiser to the big-hitting division and at this level any fighter is susceptible to power. That doesn't just apply to the Ukrainian.

That step up seems to be being majorly overplayed by the prices, as well as the media, and when you look at the bare bones of this contest it's a mismatch.

Chisora has improved as his career has progressed both in terms of dedication and performance and he’s probably in the best shape of his career both physically and mentally.

However, the are plenty of miles on the Londoner's clock and he is now 36.

Of course Usyk is going to be a fairly small heavyweight and he is unlikely to carry the devastating one-punch power of someone like Deontay Wilder. However, the southpaw has the variety, skill and movement to overwhelm Chisora and get him out of the ring before the final bell.

Del Boy is as game as they come, but Usyk could well prove to be the outstanding fighter in this division, alongside Tyson Fury.

We may need to wait for confirmation of the Ukrainian's heavyweight credentials, but at even-money we get the opportunity to take a tempting price about a stoppage victory for a fighter who really only has one question to answer.

An early night for the southpaw doesn't look out of the question either and at the prices it could also pay to have a couple of plays in the round betting market. Usyk in the third and fourth make most appeal at 33-1 and 20-1.

Fellow heavyweight Dave Allen is on the undercard and there's a women's WBO world middleweight title fight between Savannah Marshall and Hannah Rankin. However, from a punting perspective Lee Selby's IBF lightweight title eliminator clash against George Kambosos looks the bout to concentrate on.

Selby lost his world featherweight title to Josh Warrington two years ago and has fought just twice since that split decision defeat.

However, the Welshman has since beaten Ricky Burns, never an easy task, and he may have been taken too lightly by the layers here.

Kambosos is the younger and less exposed fighter but the Aussie still has to prove he is up to this level.

It looks likely that this fight will go the distance but at the prices Selby can be backed to keep his dreams of becoming Wales’ first-ever two-weight world champion alive.