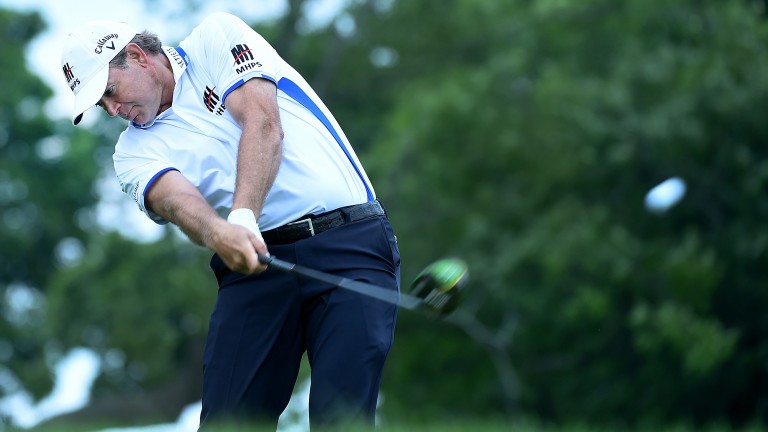 Champions Tour rookie Retief Goosen hasn’t opened his seniors account yet but it should not be long until he does.

The quiet South African rates a great each-way bet at 18-1 for the Senior US Open, which moves to pastures new this week, the Warren public course at Notre Dame in South Bank, Indiana.

The off-the-beaten track venue will put Goose on a level playing field with his more experienced rivals. Indiana hasn’t hosted a major tournament since the 2009 Senior Open.

It is ten years since the 2001 and 2004 US Open champion last won anywhere, so it is understandable that it has taken a few months for the Pretorian to get competitive in his new surroundings.

He had a big shout last month at the last senior Major, the PGA, but struggled with being in contention and fell back to fourth on the final day.

Goosen, one of the longest drivers on tour at 286 yards, almost put that negative experience to positive use last weekend when only a Jerry Kelly birdie beat him in a playoff for the American Family Insurance title in Kelly’s home town of Madison, Wisconsin.

Having won the main US Open twice should give Goosen an edge when it comes to the senior version.

Steve Stricker is a worthy favourite and Goosen’s main danger. He was the first to be eliminated in Sunday’s three-man AFI playoff which shook the locals as Stricker was playing in his home state.

By bagging his first career Major at The Tradition, by six shots, Stricker got one monkey off his back and he will surely win more.

Bernhard Langer has won this year and nobody is writing Miracle Man off just two months shy of his 62nd birthday but signs of wear and tear are becoming evident and he is not as consistent as he was.

If there is to be a European winner, another Champions newbie Darren Clarke could surprise. The links-style layout should suit and he is hitting it a mile. Fourth in the Japan Championship two outings ago showed the 2011 Open champion has some game left.

Paul Broadhurst is a big-occasion player who almost won his third senior Major last month until blowing up down the stretch at the PGA but the gutsy Englishman is a grafter who will come again, particularly on courses set up for Majors.

Kelly and Scott McCarron are respected - McCarron is a triple winner this year and PGA runner-up - while a strong defence can be expected from steady David Toms. He hasn’t won since last year’s breakthrough but has chalked up two second places and a raft of high finishes.

Michael Campbell, the 2005 US Open champion, makes his senior Majors debut while Colin Montgomerie and Miguel Angel Jimenez could make the frame.