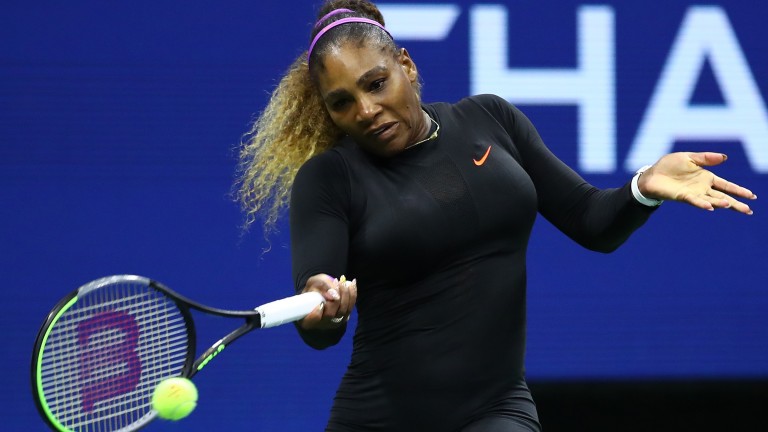 Serena Williams looks fully tuned in on her way to her semi-final thrashing of Elina Svitolina
Clive Brunskill
1 of 1
By Adrian Humphries 4:56PM, SEP 6 2019

Canadian parvenu Bianca Andreescu looks a special tennis player, but the young woman who is fast becoming known for hardly ever losing faces the toughest test of her burgeoning career when she takes on Serena Williams in the US Open singles final.

Whatever happens, it has been a dream year for Andreescu, who has lifted silverware in Indian Wells in March and a homeland trophy in Toronto last month.

That Ontario crown came courtesy of Williams retiring after just four games of the opening set. And while Andreescu has seen early support to frank the fact that she won three of the four games the pair have contested in earnest, the veteran Williams looks to be stripping fit in her pursuit to add to her 23 major victories this season.

One more Grand Slam singles triumph would see her draw level with Margaret Court's record, but while some in recent days have questioned Williams' wellbeing in the Big Apple, she has consistently answered such doubts by hammering decent opponents in Maria Sharapova, Karolina Muchova, Petra Martic, Qiang Wang and, in the semi-finals, fifth seed Elina Svitolina.

The Swiss 13th seed spurned chances to reach the final, but in the end you have to make the most of the opportunities that come your way and Andreescu thoroughly deserved her triumph.

But while Bencic, who had looked resolute on the way to the semis, finally stuttered against the powerful Canadian the boot could be on the other foot against Williams.

Andreescu, still only 19, has not been seriously tested all season and has lost only four matches since 2018.

It's an incredible tale of a new talent, but it may also pay to remember that the teenager's sometimes bombastic nature has riled more than the odd opponent, among them Williams' friend Angelique Kerber.

There will have been a good deal of chat in the locker-room and it's just possible, in her homeland major, that we could see the most focused performance from Williams this year.

Given Andreescu's ability, the favourite looks too short to consider to win the final, so that means taking longer odds about an alternative betting market.

Williams is a shade of odds-on to triumph in straight sets, which can be considered, as can the 8-11 about the American successfully conceding a handicap start of 3.5 games.

Williams will know she is unlikely to be able to mess about against Andreescu, but even the 37-year-old title favourite may struggle to deny her power-packed rival in two sets, so chance the second option.

FIRST PUBLISHED 4:56PM, SEP 6 2019
It's just possible, in her homeland major, that we could see the most focused performance from Williams this year