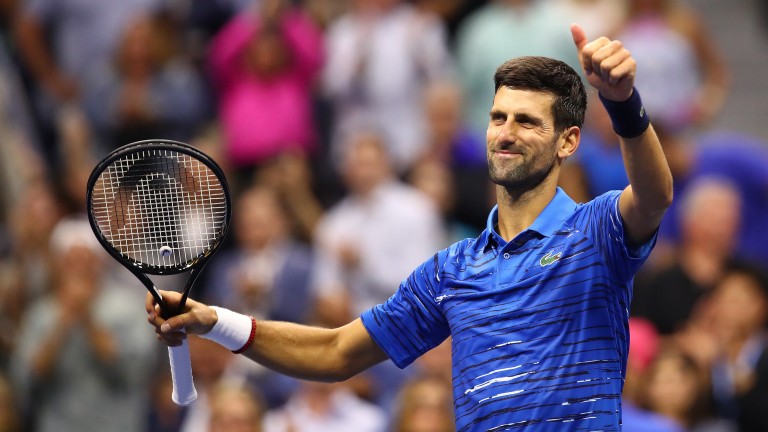 A rainy day in New York City caused havoc with the scheduling on day three of the US Open with only a handful of matches featuring luminaries able to be played.

In the men's singles, only Novak Djokovic, Roger Federer, Kei Nishikori and Dominik Koepfer had the bonus of playing and completing their matches on time - Grigor Dimitrov also progressed courtesy of a walkover.

In the women's action, Serena Williams, Ashleigh Barty, Karolina Pliskova, Elina Svitolina and Madison Keys were fortunate to take to the court and earn victories.

Djokovic did well to thwart Juan Ignacio Londero 6-4 7-6 6-1 but the world number one is suffering from a left shoulder injury, which needed attention on three separate occasions during the match. It's not his playing arm - Djokovic is a right-hander - but the Serb plays two-handed backhands so the shoulder is being used a lot.

Afterwards, the defending champion, who lost his serve five times, said: "I haven't felt that kind of sensation many times and it was definitely affecting my serve and backhand. I didn't know if I would be able to finish the match. I'm really glad to have done so."

Djokovic has eased to 5-4 for the title, while second seed Rafael Nadal has been cut to 5-2 to be crowned king of New York.

For the second match in a row, Federer has fought back from dropping the opening set to progress. In the last 64 it was the turn of Damir Dzumhur to win his first set against the Swiss veteran.

However, Federer regained his composure to triumph 3-6 6-2 6-3 6-4 against Dzumhur and set up a third-round date with either Lucas Pouille or Britain's Dan Evans.

Federer was trimmed to 7-1, principally due to Djokovic's shoulder problem.

American legend Williams overcame a slow start to defeat teenage compatriot Caty McNally 5-7 6-3 6-1 and progress to a date with either Karolina Muchova or Su-Wei Hsieh. The favourite's title odds were cut to 3-1 afterwards.