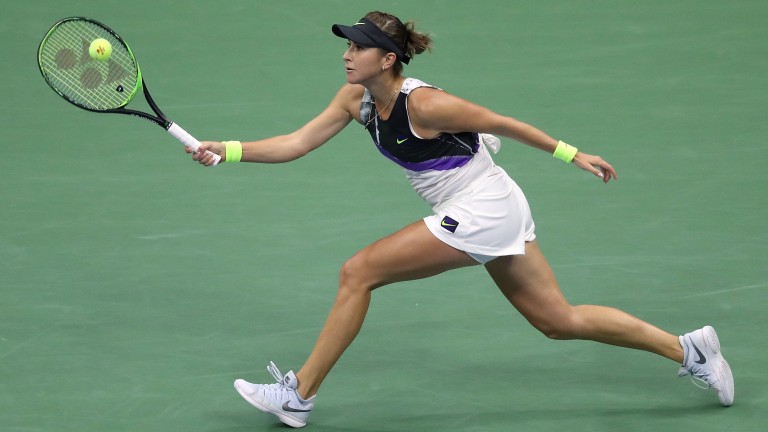 Belinda Bencic reaches out wide on her way to a fourth-round victory over Naomi Osaka
Matthew Stockman
1 of 1
By Adrian Humphries UPDATED 2:58PM, SEP 8 2019

There was a mix of expected results and surprises on day eight of the US Open as Rafael Nadal, Gael Monfils and Bianca Andreescu progressed but Naomi Osaka and Alexander Zverev came croppers.

Nadal was tested early on against 2014 New York hero Marin Cilic, but the Majorcan second seed came through well in a 6-3 3-6 6-1 6-2 victory over the Croat.

The Pearl of Manacor went odds-on for the first time after the triumph but still has plenty of work to do to nail a fourth Flushing Meadows singles crown.

Alexander Zverev showed once again what a slow-burner the German is in the majors when falling 3-6 6-2 6-4 6-3 to the admirable Diego Schwartzman.

The diminutive Argentinian, his country's top representative in the absence of injured Juan Martin del Potro, will next meet Nadal with a semi-final place at stake.

In the women's singles, Belinda Bencic served notice that she is ready to break through at major level with a 7-5 6-4 victory over last year's US Open champion Osaka.

The Swiss ace kept tabs on the top seed in the first ten games of the match, but took her chance well to break in game 11 and seal the opening set one game later.

Bencic, who also broke early on in set two, had crushed Osaka 6-3 6-1 during the Japan­ese's title defence in the California event in March.

And while a similar scoreline always looked unlikely in the Big Apple, the Swiss miss had enough to frank that triumph over Cori Gauff's last-32 conqueror.

Bencic was cut to 8-1 from 22-1 after her victory and she will next meet Croatia's Donna Vekic, a 6-7 7-5 6-3 winner of a battle royal against Kiki Bertens' conqueror Julia Goerges.

But Bianca Andreescu, 4-1 and second in the outright betting behind market leader Serena Williams, steadied the ship for favourite backers when seeing off Taylor Townsend 6-1 4-6 6-2 in the late match.