Upbeat Blues are on the march to glory

Leaders primed to increase lead at the top 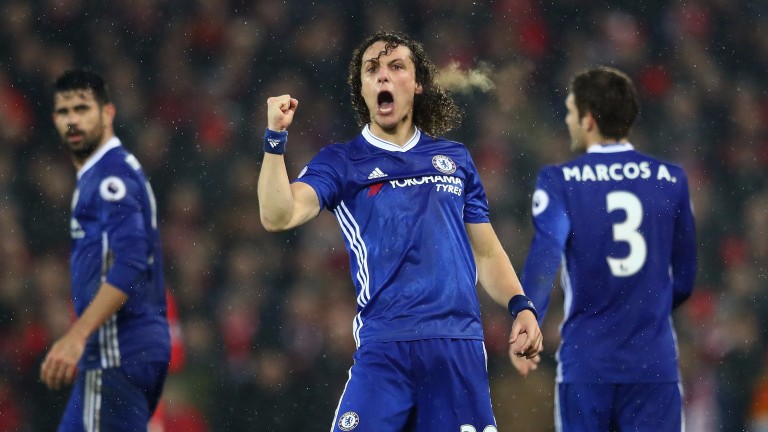 Chelsea have not looked back since losing 3-0 at Arsenal at the Emirates in September and they can show how far they have progressed over the last five months by defeating the Gunners at Stamford Bridge.

It has already been an excellent week for Chelsea, who extended the gap to second place from eight points to nine despite being held to a 1-1 draw at Liverpool.

The value of the point at Anfield was magnified by events elsewhere with Tottenham drawing 0-0 at Sunderland and Arsenal losing 2-1 at home to Watford.

Arsenal fans reacted angrily to the midweek reverse which seems to have to have ended the club’s title ambitions.

Arsene Wenger’s side were outfought and outplayed in the first half against the Hornets and lacked bite in midfield.

With tough-tackling duo Mohamed Elneny and Granit Xhaka unavailable, Arsenal’s problems increased when Aaron Ramsey limped off with a muscle strain on 29 minutes.

Alex Oxlade-Chamberlain came on to play in an unfamiliar midfield role for the rest of the game. He was a factor in Arsenal’s much-improved second-half performance although the balance of play was always likely to shift as Watford struggled to maintain the energy required to continue their pressing tactics.

Arsene Wenger did his best to take the positives from the Gunners’ second-half display but nothing could paper over the cracks of a dreadful opening 45 minutes which would likely lead to a heavy defeat if repeated against Chelsea.

The Blues come into the game knowing that a draw would not be the worst result in the context of their title challenge.

But the home supporters at Stamford Bridge will be urging their side to avenge the September loss to Arsenal and they are playing well enough to oblige.

There have been slight concerns over a dip in performance from Eden Hazard, who is reportedly carrying a minor muscle strain, but the rest of the players looked physically and mentally fresh on Tuesday night as Antonio Conte’s charges coped well with a
highly-motivated Liverpool side stung by recent setbacks.

Arsenal will be just as keen to respond to a poor performance and could seriously test the Blues backline if star men Mesut Ozil and Alexis Sanchez are on song.

But there is no room for weak links in the biggest matches and Arsenal look inferior to Chelsea in defence and midfield.
Wenger’s side have kept just one clean sheet in their last eight Premier League away games and a lack of leadership at the back remains a problem despite last summer’s £35m signing of Shkodran Mustafi from Valencia.

It all leaves Arsenal in the familiar position of facing a scrap for Champions League qualification and their top-four hopes are likely to recede with a second defeat in five days.

Team news
Chelsea
Eden Hazard has been nursing a minor muscle strain but is likely to start, meaning that Pedro and Willian are vying for the other attacking midfield position.

Arsenal
Arsenal have problems in midfield with Granit Xhaka suspended,
Aaron Ramsey injured and Egyptian international Mohamed Elneny away at the Africa Cup of Nations.