United can seize their chance in crunch Europa League clash

Lively Dutch should find the net 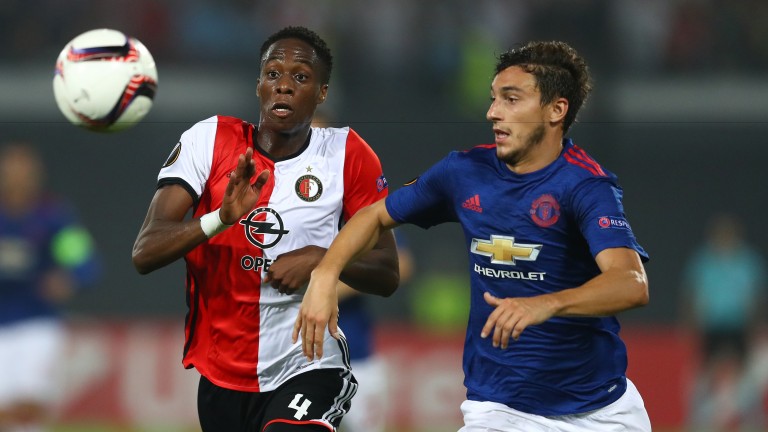 Manchester United have been making hard work of the Europa League group stage but can climb back into the top two positions by beating Feyenoord at Old Trafford.

The Red Devils’ six points have been amassed in home matches and the Premier League side are 2-5 to topple the Dutch league leaders, who defeated them 1-0 in Rotterdam on matchday one.

Those odds might seem on the skinny side but Feyenoord have problems at the back with influential centre-back Eric Botteghin suspended and first choice left back Terence Kongolo struggling with an injury.

Team news
Man Utd
Henrikh Mkhitaryan is set to start but Eric Bailly and Chris Smalling miss out after failing to recover from injuries.

Feyenoord
Terence Kongolo is an injury doubt and Eric Botteghin is suspended.

Solid defending has been a strong point for Feyenoord, who have the best defensive record in Group A (two goals conceded from four games) and the second best in the Eredivisie (seven goals conceded in 13).

But losing at least one and possibly two key planks of the back-line may leave them vulnerable against a United side showing signs of improvement.

It would be easy to paint a negative picture of United, who have won just one of their last six league games (a 3-1 success at basement boys Swansea).

But there were positives for Jose Mourinho to take out of Saturday’s 1-1 draw at home to Arsenal in a game which was largely dominated by the Red Devils.

United opened up the Gunners’ defence on numerous occasions but failed to show the necessary coolness in front of goal and sorely missed the presence of suspended Swede Zlatan Ibrahimovic.

Defensively they were found wanting as Olivier Giroud was afforded ample space to nod home a simple equaliser and those problems could persist while centre-backs Eric Bailly and Chris Smalling remain sidelined.

United have conceded 19 goals in 18 games this season and might struggle to contain a Feyenoord attack led by Danish international striker Nicolai Jorgensen and ably supported by veteran forward Dirk Kuyt.

Jorgensen has led the way the with 11 goals in all competitions this season but Kuyt, who has scored five goals in 13 league games, remains a threat and will be desperate to make a positive impression on his return to the English stage.

Feyenoord definitely have the firepower to get on the scoresheet but their makeshift defence may let them down and the best play in a potentially high-scoring game is to side with the United victory and both teams to score at 23-10.