United can brush aside toothless Tigers 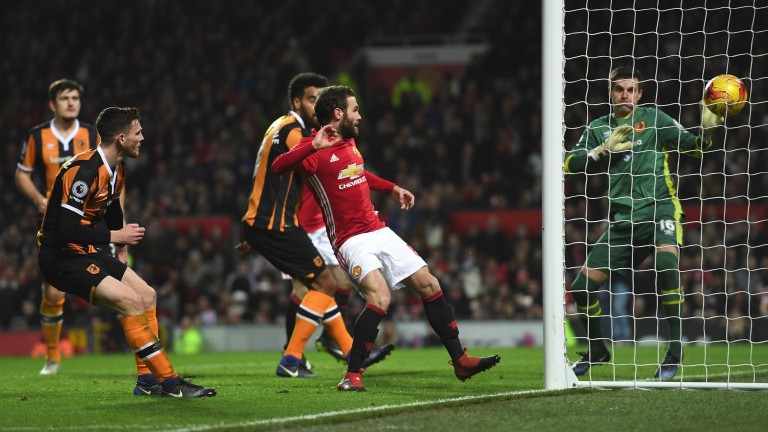 Manchester United put in a disjointed performance in the opening leg of their EFL Cup semi-final against Hull but Marouane Fellaini’s 87th-minute goal sealed a barely-deserved 2-0 victory which has set them up for a routine task in the return match at the KCom Stadium.

Hull’s players will give it their best shot – as they have done in the vast majority of their matches this season – but the odds are stacked against them with United 1-66 to reach Wembley and the Tigers 20-1 to progress.

And Hull’s task got even tougher yesterday when they accepted a reported £10m bid from Burnley for their star player Robert Snodgrass.

Agreeing to sell Snodgrass to their relegation rivals is akin to raising the white flag in the Premier League survival battle.

But it is just the latest disastrous move by Hull owner Assem Allam, who presided over the sale of Mohamed Diame late in the summer transfer window and the departure of key midfielder Jake Livermore to West Brom last week.

There have been incoming signings this month with Evandro arriving on a permanent contract from Porto and Omar Elabdellaoui, Lazar Markovic and Oumar Niasse joining on loan from Olympiakos Liverpool and Everton, but their squad lacks quality and remains painfully thin on numbers.

Despite the off-field mess, Hull performed creditably in their 2-0 loss at Chelsea on Sunday.

However, they lost Ryan Mason and Curtis Davies to injuries during the Stamford Bridge contest and go into the United game with at least eight senior players unavailable.

While Hull manager Marco Silva wrestles with an injury crisis his opposite number Jose Mourinho has a more welcome selection conundrum with everybody fit and available.

Mourinho could probably put out a second-string side and finish the job with something to spare but will probably hold most of his fringe players back for Sunday’s FA Cup fourth-round tie at home to Wigan.

Mourinho felt his side lacked intensity in the goalless first half of the first leg against Hull and he demanded and received a major improvement after the break.

Complacency looks like the biggest danger to United but even if they play the match in first gear it is hard to see where Hull are going to hurt them.

Abel Hernandez is Hull’s best bet for a goal – he is 9-1 to net first – but Snodgrass has been by far his most reliable source of serviceand that supply line has been switched off.

Hull’s set-piece threat is also reduced by the Scottish winger’s absence and it is difficult to see them causing many problems from open play against a United side who have conceded just two goals in their last five games.

The full backs – right-sided Elabdellaoui and left-sided Andy Robertson - like to get forward and will be crucial to Hull’s plan but United are more than capable of dealing with the threat and it should only be a matter of time before they deal the killer blow at the other end.

It looks like being another win and another clean sheet for Mourinho’s men, who are set to extend their unbeaten run to 18 games.

Team news
Hull
Lazar Markovic is awaiting international clearance and Robert Snodgrass is unlikely to feature after Hull accepted a bid from Burnley for his services. Curtis Davies (hamstring) has joined Ryan Mason, Moses Odubajo, Alex Bruce, Will Keane and Greg Luer on the injury list. Ahmed El Mohamady and Dieumerci Mbokani are at the Africa Cup of Nations.

Manchester United
Luke Shaw is in full training but is short of match fitness and unlikely to start. Marcos Rojo is in contention after recovering from a bout of flu.