United boss Mourinho has an important decision to make

Tips and advice from the betting industry insider 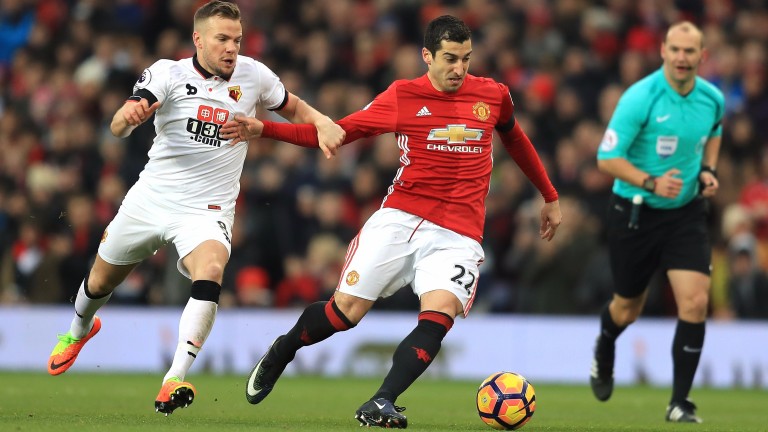 Despite requiring a few months to settle into English football and proving to Jose Mourinho he can perform the duties his manager expects of him without the ball as well as with it, Henrik Mkhitaryan has fit into Manchester United's squad very well.

Over the past few months he's arguably been their most influential player, or at least second only to the mercurial Zlatan Ibrahimovic.

When injured for games like the EFL Cup final, which United eventually won 3-2 (mostly thanks to Ibrahimovic) but were clearly second best to Southampton for long periods, it was evident they missed Mkhitaryan's quality.

Ever since Chelsea went on that incredible run of the 13 consecutive league wins and all but put the title race to bed in January, the goal for United has been to qualify for next season's Champions League.

They have two routes available to them to try to achieve that. Either finish in the top four of the Premier League or win the Europa League.

At various stages this season – usually after they've had a poor league result – there have been pundits suggesting United should concentrate on the Europa League.

However, until very recently, if you compared the odds on them to finish in the top four and to win the Europa League, at every single point the price of a top-four finish has been shorter.

There has been no time – until last week – that the market has believed their best chance of Champions League qualification was via the Europa League, and therefore, if a decision was required to prioritise one competition over the other, the market was clear that it was always the league United would have been wise to focus on.

And that's exactly what we saw.

In the early stages of the Europa League, Mourinho made changes to his side to give game-time to fringe players and rest key ones, gambling that those rotated sides would still be able to get his side through to the knockout stages, while remaining fully focused on getting his best team on the field for each league match.

Last week, for the first time, those odds with all major firms and on the betting exchanges flipped. After the first leg draw in Rostov, with an away goal in the bag, United shortened up a little for the Europa League while the two points dropped at home to Bournemouth in a game they'd expect to win hit their top-four hopes, and therefore saw them drift for Champions League qualification via that route.

Fascinatingly, Mourinho’s attitude to prioritising these routes to success appeared to flip at the very moment the odds did.

With Mkhitaryan returning from a hamstring injury, it was highly likely the manager would only start him in one of the two games this week, Rostov at home on Thursday or Middlesbrough away on Sunday.

United were 1-4 shots in 90 minutes at home to Rostov – shorter still to qualify. In weeks and months gone by, the evidence available to us suggests Mourinho probably would have given such a key player returning from injury an extra few days and saved Mkhitaryan for the league game on the Sunday, which he'd have seen as the more important of the two games.

But this time he didn't. Mkhitaryan played on the Thursday.

Even though Ibrahimovic was able to play on Thursday but suspended for Sunday, and even though they were 1-4 to beat Rostov and a significantly bigger price to beat Middlesbrough, he still chose to use the key player, who would only play in one or the other of those games, in the Europa League.

As it turned out, they won both games. But that, to me, was a clear sign that Mourinho’s priorities had altered.

And for that to happen at the exact time the odds flipped, was it just coincidence? I’m not suggesting someone like Mourinho looks at, or takes any notice of, betting odds. But is his instinct and his understanding of the game, his team, and their chances so good that he – consciously or subconsciously – assessed their chances, and therefore indirectly their odds, and did such a good job of it that he completely agreed with the market?

Or do United, a company worth billions of pounds after all, have statisticians and analysts behind the scenes pointing out the percentage chance of qualification via either route to the manager? If so, and a lot of big clubs have similar, how many managers actually listen and take notice of such things?

The twist in this tale is that last Sunday's results gave a significant boost to United's top-four chances. Not only did they get the three points at Middlesbrough, but the draw between Manchester City and Liverpool was probably the best outcome possible for them.

At the time of writing, United's top-four odds on Betfair were 2.54. Their odds to win the Europa League? Amusingly, also 2.54.

So what will Mourinho's next move be? Is he aware his chance of Champions League football via either route is now broadly identical?

If he attempts to give full focus to both competitions, how much does it increase the risk of ending up with nothing? Will he have his own view on which of those prices should be bigger or shorter?

I don’t know the answers, but I’m looking forward to finding out.

It'll be worth paying attention to his attitude to the two competitions in coming weeks, because as one of the best managers we've ever seen in this country, he'll get this right a lot more often than he'll get it wrong.

It may be stretching the concept slightly to suggest the league table is lying about a team I believe to be the worst in the division when they are 23rd of 24, but Chesterfield’s performance level in 2017 is probably still worth highlighting.

Though they sit four points above crisis club Coventry, there is no doubt whatsoever that if those two sides were to meet on a neutral ground the market would send Coventry off as favourites.

The Spireites have already been relegated from this division four times since the turn of the century and it's now almost no offers to become five. Sitting in 23rd place, they've won just two games since Christmas and they've come against the sides in 22nd and 24th.

Chesterfield need some serious changes next season if they want to push for an immediate return to Sky Bet League One, because on my ratings they're not even a mid-table Sky Bet League Two side.

Meanwhile, Saturday's opponents Rochdale have just come to the end of a run of league fixtures which has seen them play ten of their last 13 matches against top-half sides.

Their reward for completing that harsh sequence is now eight consecutive games against bottom-half teams, which gives them a fair chance of putting together the run they need to force themselves into playoff contention at the death.

They ought to create an abundance of good scoring opportunities at Chesterfield, and while we can never be sure whether it'll be the day they take those chances of not, we can at least be confident we're having a decent bet at the price.

Elsewhere in England, with no football in the top two flights, there is a strange situation for me where there are a plethora of good bets in League One, but every match in League Two looks to be priced correctly.

AFC Wimbledon, a side who have done very well playing at this level for the first time but for a brief mid-season drop off, at home to Southend look too big, while it’s now just one defeat in 13 for Lee Clark's rejuvenated Bury.

The market continues to slightly underrate them and they are a bit too big to ignore at home to promotion-chasing Fleetwood.

Lastly, on Sunday, Bradford make the short journey to badly stuttering Scunthorpe and are value to confirm it is they, rather than the Iron, who will be hot at playoff time.