United are worth a nibble at fancy odds 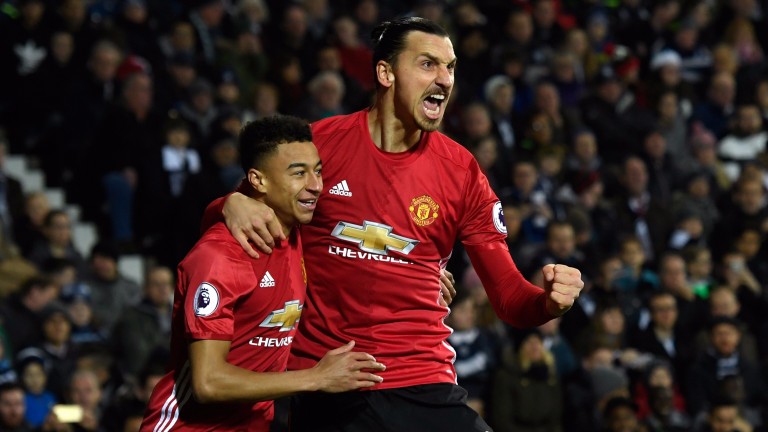 Anyone who has backed Arsenal to win the Premier League can forget about that bet now – the last week has proved that it’s a loser.

A week ago I was still bullish about the Gunners in this wide-open title race but two matches have undone all the good work.

It’s not just that they lost 2-1 at Everton and by the same scoreline at Manchester City. It’s that they went ahead in both games and got nothing from either. Champions don’t do that, not in back-to-back fixtures.

The game at Goodison was impossible to lose, but Arsenal found a way. Showman Mesut Ozil was suddenly found wanting and I was left thinking that nothing’s changed with this team.

Yet this season, like last, the title is theirs for the taking. They just lack what’s needed to cross the line.

I still woudn’t touch Chelsea at the price. The fact they’ve won 11 games in a row means this is exactly the right time to be taking them on.

Antonio Conte has hardly used any players and hasn’t had to deal with many injuries or suspensions. Any issue with Diego Costa or Eden Hazard and I’m sure they’ll get found out.

Manchester City are still the team with the most about them. Pep Guardiola needs a new centre-back and I’ve long maintained that I’m worried about Claudio Bravo in the ball-playing keeper role – not that Guardiola will change his philosophy.

The interesting team of all the top six is Manchester United, now 13 points off the pace but worth a nibble at a big price.

I’m not a fan of Jose Mourinho and haven’t been for a while. I had my doubts over what he’d bring to Old Trafford and all I saw in the first few months of his reign was the same division and trouble that he left behind at Chelsea.

You can’t be that sort of manager at United – but over the last couple of weeks there’s been a difference in Mourinho’s behaviour.

He’s been out on the pitch, embracing players, a sign of humanity that has been sorely lacking in the past.

Players need to see that, and will respond in the right way.

It’s not beyond the realms of possibility that United win their four matches over Christmas and the New Year – in fact, Mourinho couldn’t have asked for a better-looking fixture schedule.

Key players are making a difference and in United’s case, the real essentials are Michael Carrick and Zlatan Ibrahimovic.

If United are worth backing for the title then Ibrahimovic is still the alternative to Costa and Sergio Aguero in the Golden Boot market.

The fact that he’s 35 is neither here nor there. He’s fit, strong, hungry and can be left out of cup ties if Mourinho wants.

Zlatan is dynamite leading the United line and he has a lot more goals left in him yet.

Faltering Foxes not safe from drop

Bookies think it’s inconceivable that Leicester will follow the title with relegation, but they are still a value bet.

The comeback draw at Stoke shouldn’t cloud people’s views of a team who are struggling to find any sort of rhythm.

Their away record is woeful and the odd good result is being forgotten against a sea of really poor ones as opponents get used to what made the Foxes so hard to play against last season.

The Champions League will come around soon enough to add another distraction for a couple of weeks, and they are still hugely vulnerable.

I can see Sunderland pulling out of trouble and wouldn’t give up on Swansea so could easily see a couple of sides outside of the bottom three taking a tumble. Palace have to be one, though Burnley are probably in more trouble.

So who comes up? We’d assume Newcastle are certainties and Brighton don’t look like stopping, but there are some decent bets to be had in the promotion market.

Aston Villa are a side who can get into the playoffs – and you won’t find 6-1 around if they do.

A terrible couple of years is in the process of being forgotten under Steve Bruce, whose experience and canniness is exactly what Villa needed.

Some good players were signed in the summer, some rubbish ones released, and Bruce has timed his arrival perfectly to get the best out of a really promising group.