Van Gerwen and Anderson could be worth taking on in Minehead 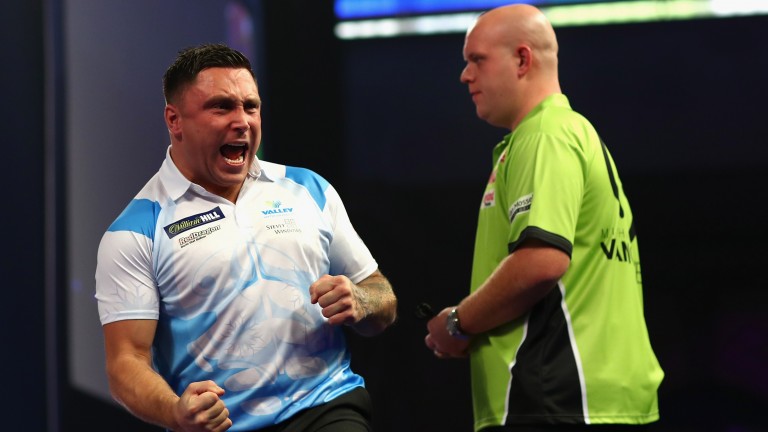 There’s an air of inevitability about this year’s Ladbrokes UK Open but before you presume that Michael van Gerwen can’t lose, consider one or two outsiders to steal the great man’s thunder in Minehead.

Van Gerwen goes off the odds-on favourite for the FA Cup of Darts, a three-day bunfight featuring 160 arrowsmiths in pursuit of a £100,000 winner’s cheque.

But Van Gerwen, despite being crowned world champion in January and playing some delightful stuff in the Premier League, went off even shorter last year and fell at the first against Jeffrey de Zwaan.

This is a glorified floor event – and Mighty Mike doesn’t win all the floor events. Indeed, he’s won the same number this year as Gerwyn Price who, at 22-1, should be on anyone’s shortlist.

Glen Durrant is another to consider and for an event where punters will pin their colours to a whole host of unfancied runners because of the openness of the draw, it's worth having a look at Anderson – though not the obvious one.

In fact the obvious Anderson – that’s Gary, of course – looks one to completely avoid. He goes off second-favourite despite not having thrown a competitive dart in 2019 because of back trouble and the Scot doesn’t sound confident heading for the Butlin’s Resort where he was victorious 12 months ago.

Third-favourite is world championship runner-up Michael Smith, who underwent surgery on his groin on Monday. Relying on painkillers to get through one match might be okay, but a whole weekend?

Van Gerwen must be licking his lips with two of his great rivals ailing, although so should everyone else in the field, which has been assembled slightly differently this year.

The six qualifying events have gone – now all 128 Pro Tour players are in, so too the top 16 from last year’s Challenge Tour plus 16 regional qualifiers. Without any qualifiers, it means (inevitably though disappointingly) that the top 32 who go into the tournament in round four are based on the world rankings. At least the open draw remains.

Welshman Price has to fancy his chances. In the last ten months Gezzy has blossomed and his confidence is sky-high. Crowds don’t like him – google last year’s Grand Slam final against Anderson if you don’t know why – but the former rugby union forward has never shied away from confrontation.

Glen Durrant is another proven winner this year, once in the BDO before joining the PDC where he has already triumphed. He’s another one whose numbers have been spectacular and he’s certainly got the bottle. The whole darting world was waiting for him to win a Tour card this year and after messing up his first three tries, he snaffled it in the fourth and final heat.

Finally, a big run is around the corner for Kyle Anderson, the ultra-consistent Australian who has picked up cheques in all six Players Championship events in 2019 with two quarter-finals and a semi his best efforts so far.

Punters looking at each-way bets should note that Betfair are going one quarter the first four, a decent touch given the size of the field.