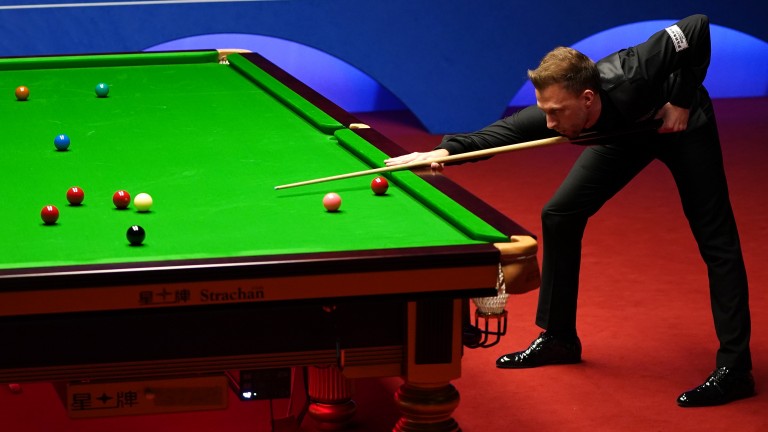 Judd Trump was an unlucky loser in last year's UK Championship final and he could go one better in the tournament this year
Pool
1 of 1
By Adrian Humphries UPDATED 9:22AM, NOV 22 2021

Free snooker tips, best bets and analysis for the UK Championship, which starts in York on Tuesday.

It's ten long years since Judd Trump won his only UK Championship title in a memorable final rumble with Mark Allen, but the world number one could double his tally this year in the tournament, which starts in York on Tuesday.

Trump won his first Champion of Champions title on Sunday, beating John Higgins 10-4 in the final, and he was also the closest of final losers at the UK Championship last season when pipped by Neil Robertson in a behind-closed-doors bash in Milton Keynes.

That made for enthralling viewing, but the Bristolian had been on a long successful run going into the major and it was no surprise that at least one fellow top player would run him close.

The UK returns to its usual home in York this year, when crowds will be allowed back into the venue. But anyone thinking of backing an outsider to surprise the top brass need only take a look at the quality of the finals in recent years.

In the 11 years since 2010, Ronnie O'Sullivan and Robertson have won the title three times, Mark Selby has won it twice, Trump and John Higgins have won it once and the only real surprise was Ding Junhui discovering an oasis of form in 2019 was quoted at 50-1 pre-tournament.

True, there are a handful of talented performers capable of upsetting the odds this season - Kyren Wilson, Yan Bingtao, Ding and Zhao Xintong are names that spring to mind, while Stuart Bingham needs a UK triumph to join the select group of players to have won all three majors.

But in reality, it's going to take a huge performance to stop one of the top five in the market lifting the trophy and, as far as outright betting goes, it's difficult to advise outside of that all-conquering quintet.

Higgins is playing well enough to win the UK and is good enough to claim a fourth victory in the tournament. But while the Scot is likely to enjoy long run in a tournament for the fourth time in as many events this season, there may be one or possibly two to stop him.

O'Sullivan seems to be finding the going a bit tougher these days and while he remains a blinding talent, the fear is no longer there for some of his opponents.

Robertson could again go close - the Australian is too talented to ever rule out - while Selby reckons his game is only just starting to take off for the season and that could be ominous news for his rivals.

However, the one they all have to beat is Trump, and while Higgins looks the Juddernaut's biggest threat in the bottom half of the draw - it would be no surprise whatsoever to see the pair clash in the semi-finals - a bet on the top seed should give backers a good run for their money.

With the title betting something of a closed shop, anyone who does fancy an outsider to go deep without winning the tournament should definitely not be put off betting on the quarters.

O'Sullivan has seldom been as potentially vulnerable on the baize as he is looking right now, and considering his sterling effort in reaching the semi-finals of the English Open recently it could pay to take a chance on Mark King to come up trumps in the second quarter of the draw.

King, victorious in the Northern Ireland Open in 2016, is once again being sent off at huge odds to win titles. However, having rediscovered something approaching his A-game and improved his focus with the help of mind coach Noel Flannery, King may be more of a force than the oddsmakers believe.

Five match wins would see King reach the semis for a windfall for his backers. But while an opener against talented youngster Jackson Page and a possible third-round clash with O'Sullivan would obviously be tough tasks, they are not insurmountable given the selection's current wellbeing.

And should King start the tournament on the front foot, the experienced Essex cueman may also be good enough to cause problems for Wilson or Yan Bingtao later on in his section.