Uihlein can take his place in golfing history

Novelty tournament is a tricky test for punters 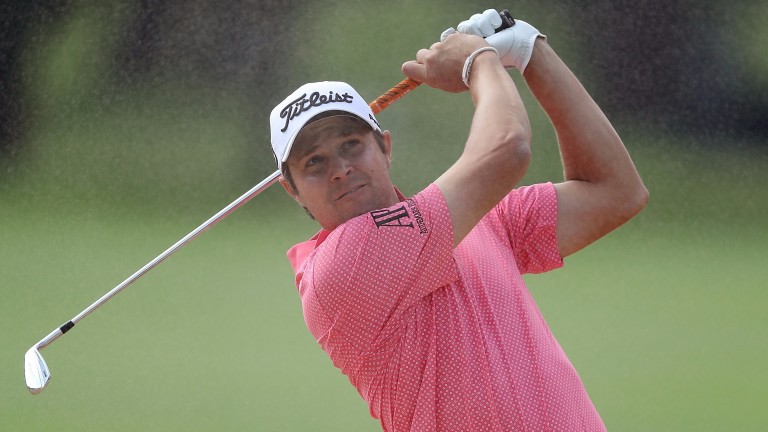 Wilkerson's top tip
Peter Uihlein 25-1
We may look back on this week's World Super Six in Perth as the dawn of a new era in golfing entertainment or a time when the game lost the plot.

For now, we just don't know, but the tournament at Lake Karrinyup represents new ground - never before have we witnessed a combination of strokeplay and matchplay deciding a European Tour winner.

So if it wasn't hard enough to pick a winner from a 156-man field already, which players can we anticipate challenging for this novelty crown?

Of primary importance will be to gain a place in the top 24 to earn a passport to the final day, where a challenger faces up to five six-hole matches if he is to be successful.

And finishing eighth in the first three strokeplay rounds is not really much worse than being at the top of the tree, although some bookmakers are offering 54-hole markets for punters who prefer the traditional approach.

It all adds up to a week when we are all going to have to suck it and see and consequently it means there is little attraction in going overboard on the staking plan.

However, the fact the Perth International has been played on the course for four of the last five years, should help us make a decent stab and one player who could be in for an excellent week is American Peter Uihlein.

How the tournament works

Uihlein finished fourth in the Perth International last year when the tournament was moved from October to February for the first time and he also claimed ninth spot in 2014, so the track with its wide fairways and slippery greens is to his liking.

He heads to Western Australia in decent form having claimed three top-15 finishes on the European Tour this year, the highlight being a tied-for-fifth finish at the Abu Dhabi Championship.

And he would have put up a stronger challenger at last week's Maybank Championship had it not been for a second-round 76 after he had opened in Malaysia with an impressive 66.

The matchplay element to the tournament should appeal to him as well. Having claimed the US Amateur Championship in 2010, he knows how to play heads-up and is capable of making his mark this week.

Next best
Brett Rumford 50-1
The tournament is also affiliated to the Asian and Australiasian Tours and while there is a sprinkling of European Tour talent heading to Perth, there is likely to be a strong home challenge.

And one local who could make a bold challenge is Brett Rumford, who has claimed top-20 finishes in five of his last six tournaments on home turf.

He finished sixth in the Perth International in 2013 and seventh last year and he insists his game is getting there after he finished tied for 18th in the Oats Vic Open last week.

Rumford will be 40 in July and has only limited playing privileges on the European Tour this year so he needs to make the best of every opportunity.

He suffered a stomach illness two years ago and even though he had to withdraw from last month's SA Open, he was challenging for a top-ten place before he dropped out.

If his putter can get hot this week, he could feature late on.

Other selections
Matthew Griffin 70-1
Gaganjeet Bhullar 125-1
The quirky nature of the tournament makes it attractive to have a couple of low-stake shots further down the betting.

Matthew Griffin finished fourth in the Perth International in 2014 and have claimed top-20 finishes in each of his last three events.

This consistent performer has missed just one of his last 12 cuts and looks ready to make the next step up after topping the Australian PGA order of merit last year.

Only a disappointing closing 75 saw him slip out of contention at the Oats Vic last week and his game looks in good shape.

India's Gaganjeet Bhullar, who has won seven times on the Asian Tour, is also worth considering.

He should be full of confidence after winning the Shinhan Donghae Open in South Korea in October and the Indonesian Open the following month.

He also fired an opening 66 at the Maybank last week where he finished 20th, which was his best finish in a European Tour event for 18 months.

Others to note
Louis Oosthuizen
Won the Perth International last year and finished third in his last outing at the Pheonix Open. Expect a strong challenge.

Alex Noren
The world number 11 is the highest ranked player in the field and has already won the Nedbank Challenge this season.

Thorbjorn Olesen
A Perth International victor three years ago but missed the cut on his two other visits and has had one top-15 finish in his last 16. tournaments

Gregory Bourdy
Finished fourth at Lake Karrinyup last year but has finished in the top 20 just once in his last 16 tournaments.

Curtis Luck
Aussie who won last year's US Amateur Championship will be hoping to make his mark before he focuses on his Masters debut.

Course winners taking part Louis Oosthuizen, Thorbjorn Olesen
Where to watch Live on Sky Sports 4 from 5am Thursday
Time difference Perth is eight hours ahead of the UK and Ireland

Format Golf enters the brave new world of the Super 6 tournament and this will be the first time a European Tour event will mix strokeplay with matchplay to decide the winner.

The tournament will be a conventional strokeplay event for the first three rounds before a series of knockout six-hole matches will decide the winner on Sunday from the top 24 players. The competition is also sanctioned by the Australiasian and Asian Tours

Course overview While the format of the competition is unfamiliar, the course should not be. Lake Karrinyup was first used on the European Tour for the 2002 Johnnie Walker Classic and staged the Perth International between 2012 and 2014 and last year, when it moved from October to be played in February.

The course was designed around bushland and a natural lake. It is hilly with wide fairways and hard and fast greens. It is littered with bunkers, and water comes into play only at the third hole. The uphill 454-yard par-four sixth is the most difficult challenge, while the 220-yard par-three eighth is another brute.

The short, downhill par-three 12th has a tiny green which is notoriously tricky to hit when the wind is up, which is often the case in Perth. Scoring opportunities are plentiful, though, with four short par-fours of 322 (first hole), 376 (ninth), 369 (tenth) and 330 (14th) yards. Three of the four par-fives (the third, 11th and 15th) are also there for the taking, but the 612-yard seventh is no pushover.

As with most Australian courses, there is bundles of pace and borrow in the greens, along with plenty of run-off areas around them

Weather forecast Australia has been roasting for the last couple of weeks but temperatures should calm down a bit and be pleasantly in the high-20s to low-30s. Wind speeds should be modest for the opening round but are set to pick up at the weekend

Type of player suited to challenge With wide fairways, this looks a course where accurate iron-players should thrive. An ability to handle wind is required. A soft touch on and around slick greens is essential as is a firm grasp of the novelty of the event itself