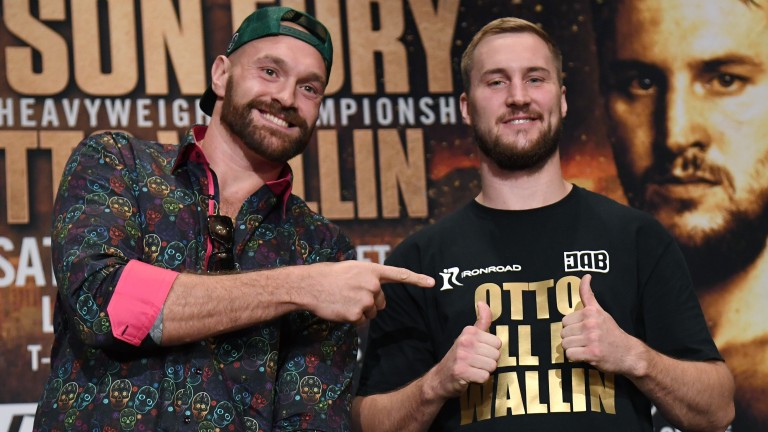 Tyson Fury proved he has the charisma to carry an entire Las Vegas pay-per-view event by himself when he beat Tom Schwarz in June, and he will no doubt relish being in the Sin City spotlight again, this time against Swedish fighter Otto Wallin.

Like Schwarz, Wallin is unknown even to most die-hard boxing fans and though the show's promoters point to Andy Ruiz's upset victory against Anthony Joshua as a reason why viewers should splash £20 on top of their BT Sport subscriptions, the comparison is laughable.

This is an exhibition designed to showcase Fury's excellent boxing skills and raise his profile in the US before bigger fights next year.

The Gypsy King - or El Rey Gitano - as he is calling himself for this Mexican Independence Weekend showcase - signed a reported $100 million deal with American broadcaster ESPN earlier this year and their plan is to have Fury headline in Vegas a few times and make him a big star before getting stuck into the big boys in the heavyweight division.

Fans and rival promoters may moan and mock, but it's the perfect plan for Fury as he works his way back from athletic oblivion.

Wallin has been chosen as an opponent as he is is fit enough to go a few rounds without having the ability to put Fury under any real pressure, and easy enough to hit to fill up the highlight reels.

Fury wasn't given the credit he deserved when he beat Wladimir Klitschko in Germany to become heavyweight champion, but he is now getting plenty of adulation from American audiences who love his positivity, openness and larger-than-life personality.

He is right at home in Las Vegas, and despite his last fight against Schwarz being a complete mismatch he turned it into the Tyson Fury Show, making an unforgettable ringwalk dressed as Apollo Creed from Rocky 4 - then serenading his wife with Aerosmith hit 'I Don't Want to Miss a Thing' in the ring after he had knocked out his opponent.

But as much as he loves to be the showman, Fury is all business once the bell goes and he will not be taking Wallin lightly. His problems seem to be a distant memory and appears more content than at any time in his career.

Wallin has never been beaten so it's hard to say how good his chin is, but Boxrec.com have him at number 46 in their heavyweight rankings and three knockouts from his last eight fights suggest he doesn't have the power to topple the Gypsy King.

Fury will want rounds under his belt so don't expect an early knockout, but he won't want to drag it out either. Schwarz was taken out in two rounds in June and Wallin should be able to do a bit better, but not much.

FIRST PUBLISHED 7:14PM, SEP 13 2019
Schwarz was taken out in two rounds in June and Wallin should be able to do a bit better, but not much